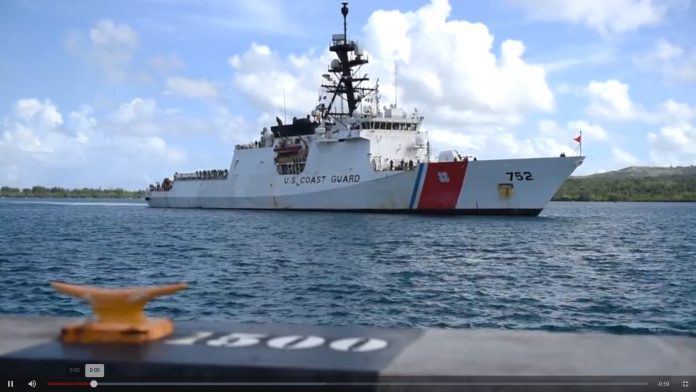 According to a release from the U.S. Coast Guard the is in transit from the Philippines and it’s deployment is intended to deter illegal fishing of highly migratory fish stocks such as tuna.

“This was a unique opportunity to employ some of the Coast Guard’s newest technology and capabilities on the global problem of illegal, unreported, unregulated (IUU) fishing,” said Capt. Bob Little, Stratton’s commanding officer.  “We are happy to support Oceania in our shared goal of sustaining global fish stocks, which are critical to many Pacific Island economies.”

“We employed our Unmanned Aircraft Systems (UAS) to expand our horizons and find vessels in the area.  This allowed us to maximize the use of our boarding teams and amplify our enforcement efforts over a short period of time,” said Andrew Dunlevy, Stratton’s operations officer.

The Western and Central Pacific Ocean is home to the “tuna belt” and supplies about 60 percent of the global tuna supply, worth an estimated $7 billion a year. With more than 5,600 fishing vessels registered with the Western and Central Pacific Fisheries Commission, there are serious concerns about the sustainability of straddling fish stocks. Illegal, unreported, and unregulated fishing presents a significant threat to the multi-national fishing fleets that operate in the region.

The Stratton is the third Legend-class National Security Cutter. The 418-foot vessel homeports in Alameda, California. The 150 crew have been on deployment under the operational control of the Navy’s Seventh Fleet in the Indo-Pacific region since June conducting joint missions. Their motto “We Can’t Afford Not To” is very apt in the face of regional IUU activity. Their patrol will continue as the head east through November.