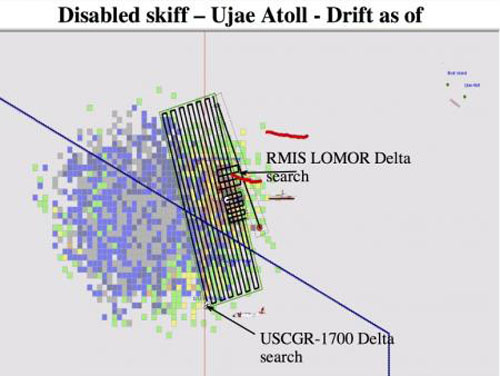 Honolulu –  The Coast Guard continues its search for a skiff with two people aboard near Ujae Atoll, Wednesday.

Watchstanders at Joint Rescue Coordination Center Honolulu received notification from the Republic of Marshall Islands Sea Patrol Office Saturday afternoon that two people had been swept out to sea aboard a 12-foot skiff, Saturday.

The skiff originally had four people aboard transiting from Ujae Atoll to Bock Island when the engine reportedly failed.

Two men jumped overboard and swam back to Ujae while the remaining two stayed aboard the vessel.

Strong winds reportedly swept the skiff out to sea before the men could restart the engine.

To calculate search areas in the complex currents of the Pacific Ocean, watchstanders use the Search and Rescue Optimal Planning System. SAROPS is a software system that uses simulated particles generated by users in a graphical interface. These particles are then influenced by environmental data to provide information on search object drift. Using information on a point of origin and local currents, it calculates the most likely area to find a person in the water.

AMVER, sponsored by the United States Coast Guard, is a unique, computer-based, and voluntary global ship reporting system used worldwide by search and rescue authorities to arrange for assistance to persons in distress at sea. With Amver, rescue coordinators can identify participating ships in the area of distress and divert the best-suited ship or ships to respond.

The 14th Coast Guard District encompasses an area of 12.2 million square miles of the Central and South Pacific. Coast Guard aircraft based in Hawaii frequently travel thousands of miles in response to search and rescue and other calls for assistance. The Hercules is scheduled to be replaced by the HC-130J, which will bring increased capabilities to Coast Guard response across the Pacific.