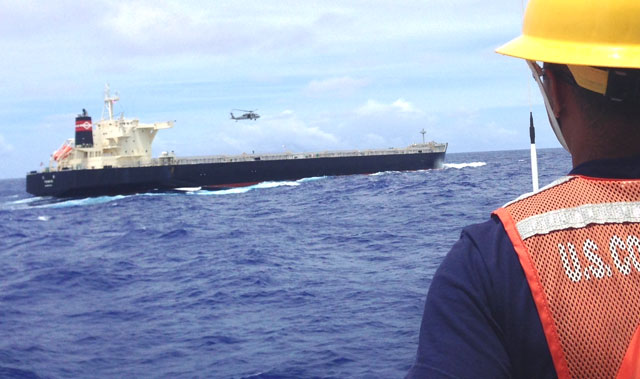 The Liberian-flagged cargo ship Tenso requested a medical evacuation for a 39-year-old male crewmember who suffered lacerations to the neck and head.

Coast Guard Cutter Assateague rendezvous with the vessel at 10 a.m. Monday and transferred a medical corpsman aboard to evaluate the condition of the injured crewmember.

After the corpsman’s evaluation and consultation with a flight surgeon, it was determined that an immediate medical evacuation via air asset was warranted.

The HSC-25 crew arrived on-scene and safely hoisted the injured crewmember at 11:14 a.m. Monday. Navy personnel transported the patient to U.S. Naval Hospital Guam where he was met by awaiting EMS and transported to Guam Memorial Hospital.

“Under a memorandum of understanding between the Navy and Coast Guard, HSC-25’s commanding officer has local authority to launch to support Coast Guard search and rescue missions,” said Capt. Casey White, commander of Coast Guard Sector Guam. “Their response capabilities are very similar to a Coast Guard air station, including trained rescue swimmers, and they respond very quickly.”

HSC-25 is the Navy’s only forward-deployed MH-60S expeditionary squadron. As part of Helicopter Sea Combat Wing Pacific, it provides an armed helicopter capability for U.S. 7th Fleet in support of logistics, search and rescue and humanitarian assistance missions.

HSC-25 is also the only squadron that maintains a 24-hour search and rescue and medical evacuation alert posture, directly supporting the U.S. Coast Guard, Sector Guam and Joint Region Marianas