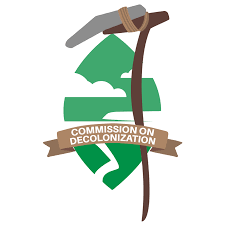 The Commission on Decolonization says options are still open to the Government of Guam “to move forward” despite the U.S. Supreme Court’s decision not to hear GovGuam’s appeal of the Dave Davis plebiscite case.

“We can pursue new local legislation … while still recognizing the plight of the CHamoru people,” states a news release issued by the organization this morning.

The release also notes that Guam now has “access to the International Court of Justice after having exhausted all domestic remedies.”  The ICJ “presents a unique opportunity for our case to take a global stage.”

“Our ancestors fought for centuries and we owe it to them, and to our children, to finish what was started so many generations ago,” states the release.

“The Commission on Decolonization remains committed to restoring dignity and justice to the people who have never been given a chance to exercise their fundamental human right to self-determination,” states the release.

Davis filed a civil rights lawsuit against GovGuam back in 2011 after he was denied the right to register to vote in the proposed non-binding plebiscite on Guam’s political status because he is not a native inhabitant of Guam.

In July last year the 9th Circuit upheld Guam District Court Judge Frances Tydingco Gatewood’s decision striking down the Guam plebiscite law which she concluded was race-based and in violation of the 15th Amendment.

Governor Lou Leon Guerrero asked the U.S. Supreme Court  to hear its appeal which the high court declined to do last week.

READ the release from the Commission on Decolonization in Full below:

COMMISSION ON DECOLONIZATION ISSUES RESPONSE TO THE U.S. SUPREME COURT RULING ON THE DAVIS CASE

Hagåtña, GU – The news of the Davis vs Guam petition for appeal in the United States Supreme Court may come as a letdown for many of us, but it should also serve as a reminder of what is at stake.

We have fought for hundreds of years to bring closure to this historical injustice that continues to plague our island and impede our desire for a full measure of self-governance.

The Commission on Decolonization remains committed to restoring dignity and justice to the people who have never been given a chance to exercise their fundamental human right to self-determination.

Even in the wake of this decision, there are still options available for our government to move forward. Now that our Supreme Court petition for appeal has been denied, it means that the 9th Circuit Court ruling stands.

We can pursue new local legislation that addresses the concerns of the 9th Circuit Court ruling while still recognizing the plight of the CHamoru people, and we now have access to the International Court of Justice after having exhausted all domestic remedies.

Though we may be weary of yet another legal battle, the ICJ presents a unique opportunity for our case to take a global stage. None of these actions will resolve our issue alone, but they are steps that move us forward and assert our desire to see this through.

We must not waiver, we must not quit. Our ancestors fought for centuries and we owe it to them, and to our children, to finish what was started so many generations ago.

As our community responds to the COVID-19 global pandemic, many may find decolonization to be trivial in comparison to the urgent challenges of recovering from the effects of the coronavirus on our people and the economy.

However, Guam’s unincorporated Territory status has an impact on every aspect of our government, including the way that we are able to respond during emergencies.

Though Congress has approved a considerable amount of aid and funding for Guam’s COVID-19 recovery, the reality remains that our political status is built to place limits on the way that the Federal Government supports all territories.

As long as we remain in a political status that does not empower our people to decide how to respond in a crisis, our ability to protect our people will always be limited.

It is clear that each status provides a different path forward for our people and each presents a different set of challenges and opportunities. Each status option poses the fundamental question about what our relationship with the federal government will be moving forward.

Each status option creates an opportunity to change the current relationship in a different way, but all options allow for the people of Guam to determine this on our terms. At the heart of self-determination is the ability to choose freely, but that choice must be an informed decision.

This is why education is the key to our decolonization. Now more than ever, the Government of Guam must remain committed to moving self-determination forward, and the Commission on Decolonization must continue its mission to educate our community. Last year, the Commission hosted a decolonization conference featuring experts from Guam and around the region.

We commissioned a self-determination study that will be released in the coming months that analyzes our current relationship with the federal government and predicts the impact that a change in political status would have on our government and our quality of life.

We are launching a multimedia education campaign that will allow for wider community engagement. It is the government’s role to stand up for justice and defend those who are most vulnerable. When our government invests in efforts to educate our community and pursue a higher level of self-governance, we are making an investment in our collective future. We must press forward and we must continue to educate ourselves. We are confident that when armed with information, we will be ready when the time comes for our people to choose their political destiny.
###