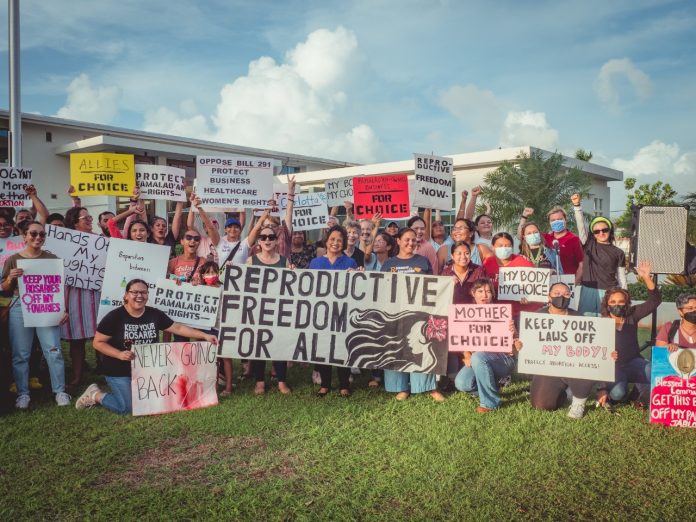 Concerned constituents gathered in front of the Guam Congress Building on Wednesday, to voice their opposition of the recently introduced, “Guam Heartbeat Act.”

Famalao’an Rights, a local organization, organized a protest against Bill 291-36. The protest consisted of concerned and key members of the community, with a goal to let the senators at the Guam Congress building to hear their concerns and plea for reproductive healthcare.

This infringes on our rights for self determination, for bodily autonomy, and this is something I’m really passionate about and you know this our future, we are women and like what our speakers said here today, Guam, the Chamorro culture traditional, matrilineal, and the fact we are not trusting women to make decisions for their own body is disturbing and heartbreaking to say the least. stated stephanie lorenzo the co founder and district director of Famalao’an Rights

Currently there is no licensed physician on island that can safely do an abortion, Bill 291-36 makes it so that when a heartbeat is identified, which is approximately at the six week gestational stage, a woman can no longer legally go through an abortion process.

People in attendance voiced their confusion on why the bill was introduced, since there is no abortion clinic on island.

Czeska Cabuhat, Co – Coordinator of the protest has said how confused she was when there’s no current access and how during the protest it was mentioned that we need access to reproductive healthcare that go beyond abortion; contraception, sexual education, help for abuse survivors.

Another concern brought up by Cabuhat, during the protest, was how this bill affects the women in the community while men don’t have similar legislation.

Cabuhat adds that “We don’t tell men how to get vasectomies, we don’t tell men what and what not to do in the bedroom and I think that it’s an absolute violation of women’s rights in particular , cause there’s no laws like this for men.”

Governor lou states “All you have to do is look back in history and see what happened before Roe V. Wade and you’ll see unsafe abortions’ you’ll see botched abortions, you’ll see people do abortions who aren’t trained, we don’t want that here on our island”

Governor Leon Guerrero continued to say quote, “get off and stop controlling my body, it is my body and my choice.” and adds that if “The legislatures know that when this bills comes to my desk it will be vetoed”

Famalao’an Rights started a petition to take action and oppose Bill 291-36 and next week a public hearing will be held for the Heartbeat Act to address any questions and concerns people may have.