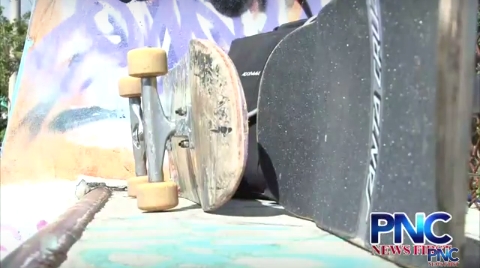 Guam – When Government stalls, sometimes the private community bands together to solve the problem. This seems to be the case with the Dededo skate park.

Efforts to repair the failing park have received a bump as community members have banded together to repair one of the main issues–the lights.

After a face book post by fellow skater Monte Reavill went viral, community members banded together, coordinating ways to fix the park   within the comments section of the face book post, a new and digital form of community organizing, in action.

Earlier today, with the help of community members and two privately owned bucket trucks the 11, non-working lights were inspected to find out how much it would cost to fix.  Assessments were taken and it seems that the broken lights might soon find a fix.

But skaters and park users tell PNC that the Dededo skate park needs more than just lights. Rusted away pipes, lack of trash receptacles, uneven cement are just a few of the issues still facing one of Guam’s main skate parks.

Reavill tells PNC that the skaters typically do random patch ups and fixes themselves, often pooling each others money together to go and buy and install equipment.

But this “do it yourself” attitude is fine with the parks regular users, they just want to make sure what they are doing is done the right way and legal.

One of the users of the park, Jayton Okada says, “we keep asking, who do we go to get permission to make the necessary upgrades, because if we want to go get a cherry picker, if we have donations from a government, I’m sorry a non-governmental agency or a business, because we do, we have people willing to chip in, especially after last nights post, we have businesses and individuals willing to come and do the installs and the upgrades, we just have to make sure we have permission and things are up to code.”

Shortly before news time, Department of Parks and Recreation director Bob Lizama informed PNC that just today (Friday), DPR approved a resolution to allow monster energy to renew it’s Memorandum of Understanding to adopt the Dededo skate park. Lizama tells PNC that monster energy will fix the light issue at the park as well as replace the broken fences and old equipment.