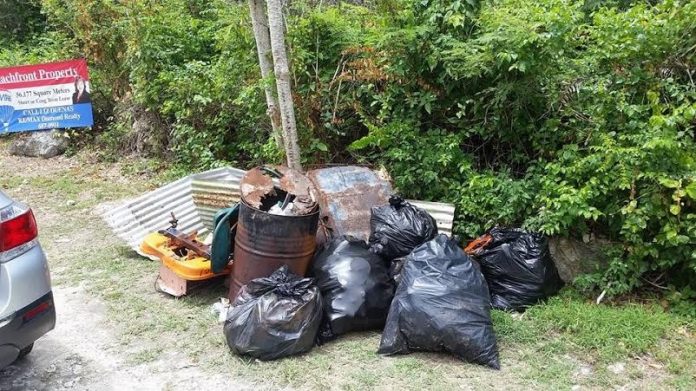 Tano Lizama and a small group of friends first took to social media before deciding to take it upon themselves to clean up after others.

Guam – The first beach in Ipan was trashed over the weekend and a few good Samaritans decided to do something about it.

Tano Lizama and a small group of friends first took to social media before deciding to take it upon themselves to clean up after others.

“I noticed the trash kind of on Sunday. I live down in Malojloj and when I was driving up Saturday morning I noticed there was like a family setting up a really large party. They had like two 20 by 40 canopies they had about 100 chairs it looked like a really big party. So Sunday morning when I drove by I noticed there was this pile of trash over there and there was still lots of people at the beach so I figured maybe the family camped out and you know maybe they were gonna take it on the end of Sunday so Monday morning when I drove by I realized that same giant pile of trash was there,” said Lizama.

Tano Lizama then decided to stop by first beach in Ipan, Talofofo to take pictures of the trash. He then posted the pictures to Facebook.”I kinda put a post out asking if anybody knew who the family was just kind of like hey you guys should come buy and pick up your trash it had over 300 shares lots of people had comments about it and about the people who threw the party,” said Lizama.

However, no one knew who left the trash. “It was pretty disappointing to see that they could throw a huge party bring all these canopies and chairs and just leave their trash there,” said Lizama.

Lizama decided to gather a couple friends and pick up the trash themselves. He also called the mayors office for assistance and by the time he and his friend arrived at around noon today(Tues.) the trash bags from the party had been picked up. However, there was still a lot of trash scattered throughout the beach.

In fact they filled more trash bags with things like cans, plastic bottles and paper plates. They even found some metal debris in the jungle and the mess that bonfires made from burning pallets leave behind. “What happens when you burn pallets is that all the nails and the staples and everything they’re left there on the sand,” said Lizama. The rusty nails and staples are left right near the shore for people and children to step on.

“Guam is a beautiful island. We live in paradise. We’re blessed to live here and we need to keep the island clean you know not just for ourselves, for our kids and for the visitors that come here. For everybody that leaves Guam you know we want them to have an opinion of this island that it’s a beautiful clean island with good people. We have a pretty good rep but if people come by and they see our beaches and they see the mess that locals leave it’s really disappointing and it doesn’t reflect well on the people that are here and that do clean up after themselves and so my message would be pick up after yourselves. You know you guys have trucks you have a lot of things. You can bring the trash here, take it home with you man. If you can’t take it home to throw it talk to the mayor see if the mayor can throw it for you,” said Lizama.

The Talofofo Mayor’s office says they picked up the pile of metal and other trash that Lizama and his friends piled on the side of the road.