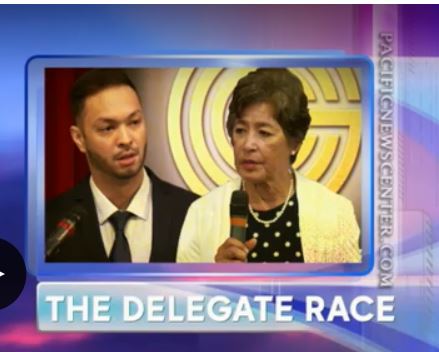 Now that Guam Congresswoman Madeleine Bordallo is out of the running following her defeat in the Democratic primary to island lawmaker Michael San Nicolas, the territory’s delegate-level representation in our nation’s lower house is about to change for the first time in a decade and a half, after Guam’s Nov. 6 general election. The ensuing story hints at next-level Micronesia and military relations for Guam and sparks up debate on whether San Nicolas or his Republican opponent Doris Brooks is best for the job.

Guam – Movers and shakers gathered inside the Micronesian ballroom at the Hilton Guam Resort & Spa on Wednesday to hear what fresh ideas Sen. Michael F.Q. San Nicolas or former public auditor Doris Flores Brooks would bring to Washington, DC as the new occupant of a delegate’s seat that’s been the sole reservation of Congresswoman Madeleine Z. Bordallo for the past 15 years.

The Republican contender for Congress says the three destinations most impacted by compact migration need to work out with the US Dept. of Interior a standard way of measuring what’s been deemed the crippling cost of open immigration from Freely Associated States under their various Compacts of Free Association (COFA’s) with the United States. Brooks says it all starts with fixing the inconsistent ways the numbers are reported to Congress’s investigative Government Accountability Office (GAO), in order to help secure more consistent, equitable reimbursement for immigrant-impacted communities.

“Compact-Impact aid has been a growing problem for Guam, but one of the major problems for Compact-Impact aid is that the three major jurisdictions of Hawaii, Guam, and the CNMI all calculate their costs differently,” Brooks said.

“And when we have a common way of reporting, a methodology that is acceptable to GAO, Congress will be more inclined then to accept that cost. That’s something auditors know about, OK? And that’s one of my strengths.”

While Brooks sees the devil in the details, her congressional race opponent, local Democratic senator and former banker Michael San Nicolas distinguishes his own economic outlook from a veteran auditor who’s spent the better part of 18 years running Guam’s Office of Public Accountability.

“One of the biggest differences between finance and accounting is accounting looks at the day-to-day, finance looks to the future,” San Nicolas said.

“I’m the only senator that introduced a resolution that expressly supports the military buildup. I’ve taken a lot of flak for it; there’s some very vocal groups that don’t want to have any kind of support for that whole undertaking, but it’s necessary for us to support it because it’s going to create the opportunities here in our community that allows for our people to stay here on Guam and find jobs and have opportunities and not have to leave.”

The candidates also discussed ways to improve labor conditions and Medicare and Medicaid reimbursement for Guam, managing the revenue-decimating effects of the Earned Income Tax Credit, as well as the cost of public borrowing, and the priority of lifting up the island’s disadvantaged.