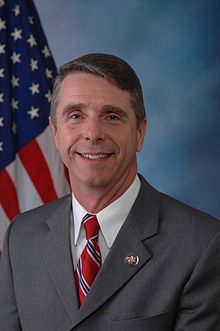 Congressman Rob Wittman who is the Chairman of the defense committee’s subcommittee on readiness met with local leaders in Tumon on Saturday.

Guam – On Saturday a congressional delegation lead by Congressman Rob Wittman who is the Chairman of the defense committee’s subcommittee on readiness met with local leaders in Tumon. Whittman is here to see the progress on the buildup.

“It is light years better than it was just three years ago but there’s still more to do and we want to make sure that it gets done on time because these things do matter as far as the timeliness not only for our military but also for Guam,” said Congressman Whittman. The U.S. lawmakers met with local leaders and lawmakers on Saturday to talk about the military buildup.

Congresswoman Madeleine Bordallo says the only thing that she sees as a challenge to the buildup are the proposed training areas in the CNMI. DOD announced last week that they would be doing a revised Draft Environmental Impact Statement for these training areas because of the 30 thousand comments that were received. This revised DEIS won’t be released until 2017. Bordallo says she and Whittman met with Saipan’s acting Governor, as well as the Mayors and Senators of the CNMI before coming to Guam. “They’re ready to compromise and sit down and talk but they want a part of the planning and I think that’s certainly something that should be accomplished,” said Bordallo.

“Obviously Guam has because they’re borrowing the money and they’re going into debt and they want to be sure that the partnership on the united states government side is solid and will continue,” said Whittman adding, “The legislature has commitments that they made through bonds and other borrowing mechanisms to build these systems. They want to make sure that the government continues to be a partner with them because some of that capacity will go for our military bases some should go to the military bases in the future.”

Prior to going to the CNMI and Guam they met with Japanese officials about the Futenma relocation. “The Futenma relocation is of concern to us because we understand there has been a delay because of the landfill permit being revoked by the Governor of Okinawa so we wanted to understand where are things today,” said Whittman.

Japanese officials told the CODEL that they are committed to getting the Futenma relocation done. “And actually we are delinked from the movement of the base in Okinawa,” said Bordallo.

Both Bordallo and Whittman believe the buildup is on track and they don’t foresee anything preventing it from occurring as planned.