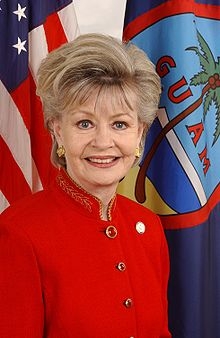 Congresswoman Madeleine Bordallo held a press conference with both Korean and local media to talk about the THAAD battery that is permanently based on Guam.

Guam – Congresswoman Madeleine Bordallo held a press conference with both Korean and local media to talk about the THAAD battery that is permanently based on Guam.

Prior to this Korean media were given a tour of THAAD missile defense system that is stationed at Guam’s Andersen Air Force Base. Despite prior requests local media have never been given a tour of this missile defense system. Bordallo told PNC yesterday she insisted that local media be invited to this press conference. Korean media are particularly concerned about the safety of the THAAD system. South Korea is supposed to be getting it’s own U.S. THAAD missile defense system soon based on a joint decision by U.S. and Korean officials. However, Korean media have been reporting that some residents are concerned about potential negative environmental and health effects that the powerful radar of the system could have. The Korean media on Guam asked the congresswoman about whether or not Guam’s residents had any concerns or had experienced any negative effects or noise pollution from the THAAD.

“There hasn’t been any impact to our civilian community to people living in the villages like I say it is located in an isolated area on a base and as far as I know there hasn’t been any environmental concerns the people were just very very pleased to be able to sleep at night and know that we were safe,” said Bordallo.

There have been some concerns that the THAAD system on Guam could be moved to South Korea however the Congresswoman says she has been assured that this won’t happen.

“There was talk in Washington that perhaps they would rotate this THAAD battery system and I became very concerned and I went to a public hearing with some very high military officials there and I spoke of my concern about that and I was not pleased about that and I requested that it remain permanently on Guam and I was assured that this would be permanently on Guam,” said Bordallo.

The congresswoman said that she would follow up with the military to ensure that Guam’s local media is allowed to tour the THAAD missile defense system.