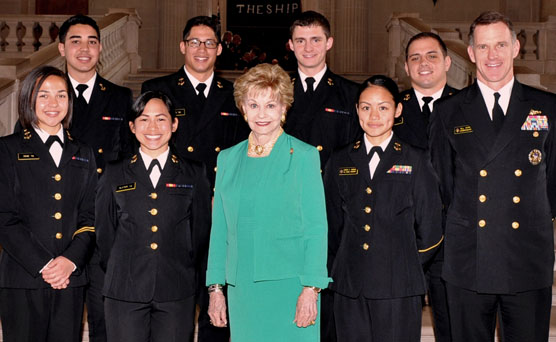 READ the release from Congresswoman Bordallo below:

Congresswoman Madeleine Z. Bordallo recently visited Midshipmen from Guam who are enrolled at the United States Naval Academy in Annapolis, Maryland. Eight Midshipmen from Guam are currently attending the USNA in preparation for their service in the U.S. Navy or the U.S. Marine Corps. Congresswoman Bordallo met with Vice Admiral Michael H. Miller, the Superintendent of the U.S. Naval Academy, prior to joining Captain William D. Byrne, Jr., the Commandant of Midshipmen, and Guam’s Midshipmen for lunch in King Hall.

“I enjoyed visiting our Midshipmen from Guam who are attending school at the Naval Academy. These young men and women are working hard as they prepare for their service as officers in the Navy and Marine Corps. I am proud of their accomplishments, and I encouraged them to continue their outstanding work. The Naval Academy provides an outstanding college education, and I hope that other young men and women from Guam will consider it as an avenue toward military service. I look forward to learning of their graduation from the Naval Academy in the years ahead and hearing about their accomplishments in their service to our country.”