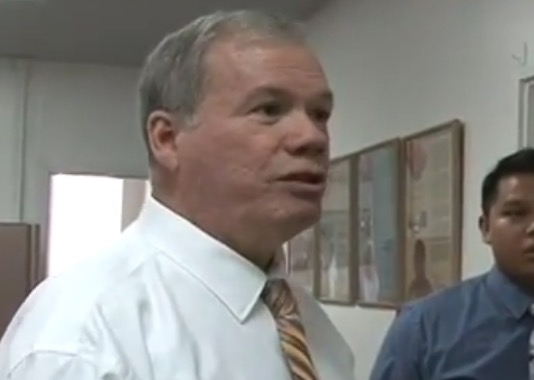 Washington, D.C. – The Chief of Staff to Congresswoman Madeleine Bordallo is being placed on administrative leave in light of sexual contact charges he’s now facing in a Maryland court.

Congresswoman Madeleine Bordallo says her chief of staff of 13 years has agreed to go on administrative leave in light of his arrest dating back to April of this year. Although the congresswoman revealed the arrest in an emailed statement, she did not disclose the charges, only saying that they were misdemeanor charges.

A staffer at her office on Guam, Jon Jr. Calvo also refused to tell us what Whitt was charged with. “This is a personal and private matter for Mr. Whitt. We’ll let the Maryland courts handle the matter,” Calvo told us.

However, PNC was able to obtain court documents from a Maryland District Court showing that 58-year-old John Joseph Whitt, in April this year, was charged with sexual offense in the fourth degree as a misdemeanor and assault in the second degree, also as a misdemeanor. We contacted the attorney of record, Peter Sean O’Neill, who refused to confirm whether Whitt worked for the congresswoman.

However, a source confirmed that this is the same John Whitt who is the chief of staff to Bordallo.

Although details of the alleged sexual offense have not been provided, this is not the first time Whitt has been accused of sexual crimes. Maryland court records also show that Whitt was arrested back in October 1996 on similar charges.

The Baltimore Sun reported on this case in 1996, saying that based on court records, Whitt was accused of fondling three different men. The victims in that case were midshipmen in the Naval Academy. Whitt was hosting the midshipmen at his apartment in Annapolis, Maryland.

It’s not clear how that case ended, but Maryland court records show under disposition that he was found guilty and was given a sentence of probation that would end on April 13, 2001. At the time, Whitt was working as the Legislative Director for then-Congressman Robert Underwood.

In her statement to the media, Bordallo said “In America, accused persons are presumed to be innocent until they are proven otherwise. I believe that the same standard should apply to John as his case moves forward. However, in order to not distract from my official duties as Guam’s delegate to congress, John has agreed to be placed on administrative leave until his case is resolved.”

You can read the release from her office below:

“In April of this year, John was accused and arrested for a misdemeanor offense. I was informed of his arrest, however he has not been convicted of wrongdoing and his case continues to move through the Maryland judicial system.

“John has faithfully served the people of Guam for more than three decades; he served in the Bordallo and Gutierrez Administrations, as former Congressman Robert Underwood’s legislative director, and as my chief of staff for the past 13 years. John has conducted his official duties with professionalism, and he has been a faithful confidant to me throughout my terms in office. He continues to be an important resource and advisor on the many issues that face our community and our people.

“In America, accused persons are presumed to be innocent until they are proven otherwise. I believe that the same standard should apply to John as his case moves forward. However in order to not distract from my official duties as Guam’s Delegate to Congress, John has agreed to be placed on administrative leave until his case is resolved.”