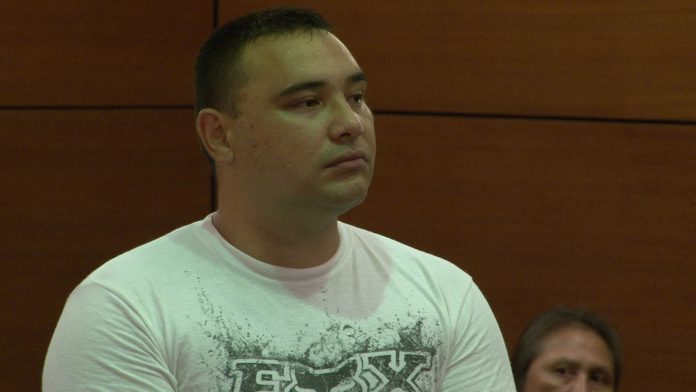 Former Police Officer Roy Pablo is sentenced for growing and smoking marijuana while on the job.

Guam – A former police officer will have to serve 8 years in prison for growing pot and smoking it while on the job.

Former Police officer Roy Pablo pleaded with Judge Alberto Lamorena for leniency on his sentencing. Pablo was found guilty in October last year of manufacturing and smoking marijuana, even on the job, which he has admitted to.

“As to my drug use during my tenure as a police officer, there’s no excuse. I have been doing drugs way before that and I was a victim to the addiction of smoking marijuana,” admits Pablo.

While he admits he was addicted to the drug, he says he did not realize at the time how his actions would affect his family, especially his children. Now, he says, after going through rehab, he is completely drug free–something he hoped the judge would consider in sentencing him.

“The people that my actions took the most toll upon were my children and I did not ever stop to realize that until I couldn’t be with them,” Pablo explains.

Judge Lamorena responded to Pablo before announcing his sentence, pointing out that what he found the most appalling about Pablo’s crime was that he was a police officer of Guam.

“First thing, you’re a police officer or you were a police officer. You swore when you were sworn in that you would faithfully uphold the laws of Guam,” Judge Lamorena pointed out. “The people of Guam expect a police officer to at least not be under the influence of a narcotic drug that would impair his or her judgment when they go out to protect the public.”

With that, Judge Lamorena sentenced Pablo to 15 years in prison, but he suspended 7 of those years so that Pablo would only have to serve 8 years at DOC.

Judge Lamorena says he was inclined to be more lenient with her since she was not in a position of public trust. Kim was sentenced to 1 year in prison with credit for time served.