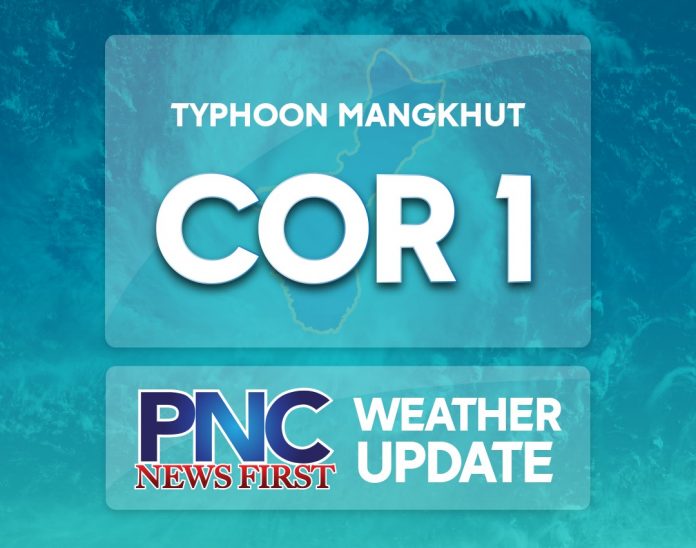 Guam – At 4 a.m. today, the Joint Information Center issued COR 1, meaning the island could expect typhoon weather conditions in the next 12 hours.

Based on its current track, Mangkhut’s closest point of approach (CPA) to Guam is forecasted around 8 p.m. tonight.

See the latest release below:

As of 1 a.m., Typhoon Mangkhut was located 15.0 degrees north latitude and 149.9 degrees east longitude. It is currently 360 miles east-northeast of Guam and 280 miles east of Saipan moving toward the west.

Mangkhut has a current intensity of 85 mph sustained winds. On its current track, it is forecasted to make its closest point of approach (CPA) to Guam around 8 p.m. on Monday.

As a reminder, these are projections and the storm may slow down, speed up, move farther south or even strengthen.

Hazardous weather will remain even after the storm’s closest point of approach has passed. Please remain sheltered in place until the all clear is given.

Heavy wind and rain increases the chance of hydroplaning. During COR1, the community is advised to stay indoors and off the roadways unless it is an emergency, or seeking shelter.

For residents seeking shelter at Astumbo Elementary School, the closest shelter is Juan M. Guerrero Elementary in Harmon across Cost-U-Less.

What to expect during COR1

Residents and visitors are advised to shelter in place, in a hardened structure, until the all clear is given.

Sirens and Emergency Alert System to be used

The Emergency Alert System (EAS) through television and radio will be used beginning at 4 a.m. announcing Guam in COR 1.

The All Hazards Alert Warning System (AHAWS) sirens, audible voice only, will be used at 7 a.m. as a secondary means of additional communication. The community can expect to hear voiced messages over the AHAWS alerting the community that Guam is in COR 1 or any additional information as needed.