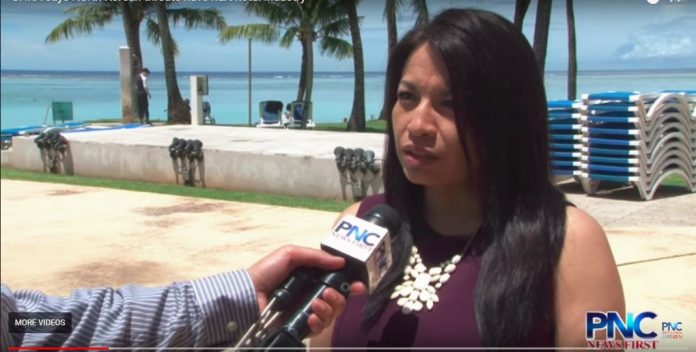 Plus: a reexamination of GHRA’s stance on hotel labor

Guam – During its Thursday night newscast, PNC issued a retraction and correction to a statement on a news post published on the Pacific News Center Facebook page at 12:40 a.m. Wednesday. The news agency accidentally misquoted GHRA President Mary Rhodes in a statement appearing on the social media site.

The quotation attributed to Rhodes stated that the local hotel occupancy tax “statute was 20 percent in the ’90s, then went down to 11.” It should have read that the occupancy tax “statute was ten percent in the ’90s, then went up to 11.” PNC apologized to Ms. Rhodes and GHRA for the misquotation and corrected the mistake appearing on our Facebook page.

The original statement by Rhodes was in response to a concerted bipartisan effort in the Legislature to impose an 18.2 percent jump in the current hotel occupancy tax rate of 11 percent by bumping it up to 13 percent.

PNC has been closely covering hearings and debate on the Fiscal Year 2019 Government of Guam budgeting process at the Legislature. Senators have been facing the arduous task of balancing the General Appropriations Act of 2019 at a time when the federal Tax Cuts  and Jobs Act has decreased corporate and withholding taxes so dramatically that lawmakers have been forced to make difficult, and politically volatile decisions between cutting the cost of government and raising new taxes during an election year in which the primary is just weeks away.

And while senators were eyeing increases to the Guam’s business privilege tax and hotel occupancy tax in mid-July, the visitor industry was quick to oppose even slight increases to such taxes.

GVB President and CEO Nathan Denight testified at a public hearing that “our island’s affordability and convenience suggest we are highly sensitive to price changes and cost.”

Citing data from a recent independent economic impact study conducted  for GVB, Guam Hotel and Restaurant Association cautioned lawmakers with the following points, among issues it raised in a July 16 press release:

– “A combined increase to the Hotel Occupancy Tax and Business Privilege Tax could cause Guam to lose approximately $201.1 to $525.4 million in visitor spending over its first five years of implementation. This represents the loss of 2.9% to 7.5% of visitor spending on a stabilized year basis.

– “Due to decreased visitor spending, Guam is estimated to realize a loss of between $23.4 million and $59.1 million of tax revenues over the first five years , excluding the impact of the tax revenue that would be generated as a result of the tax increases.”

– “The loss of visitor spending will lead to a decrease of $40.3 million to $105.4 million of total wages and salaries for local residents. On average, 200 to 523 fewer jobs will be supported by Guam’s visitor economy.

As recently as Tuesday of this week, senators were citing what they characterized as low hotel worker wages as an example of a profitable industry not paying it forward, suggesting all the further impetus to to raise hotel taxes.

“I see a lot of the employees in the hotel industry struggling, and they have to have two to three jobs just to make it in what they’re being compensated for in that industry,” Sen. Louise Muna (R) said.

“The people of Guam, the taxpayers, are subsidizing the employment costs of the hotel industry, because apparently they’re not making enough to pay their hotel workers more than $9.40 an hour. The room rate went from $140 to $207 over the last six years. Madam Chair, that’s a 47% increase in the room rate.  How much of that went to the workers?”

On Thursday Rhodes issued a renewed response to any concerns the community might have about hotel labor.

“The $9.40 per hour wage is not the only form of compensation employees receive. Employees also receive service charge, tips and fringe benefits like free meals, laundry, insurance and other forms of benefits.

“I think it’s also important to note that while they’re comparing one-third of employees at $9.40 an hour and the rest make an average of $16 an hour, a lot of the employees in the hotel industry have different jobs while working part time.

“The industry has had to scale back because of the economy. It’s been extremely difficult with the decreases in arrivals in markets like Japan. And like any other industry, $9.40 an hour is still higher than Guam’s minimum wage.”