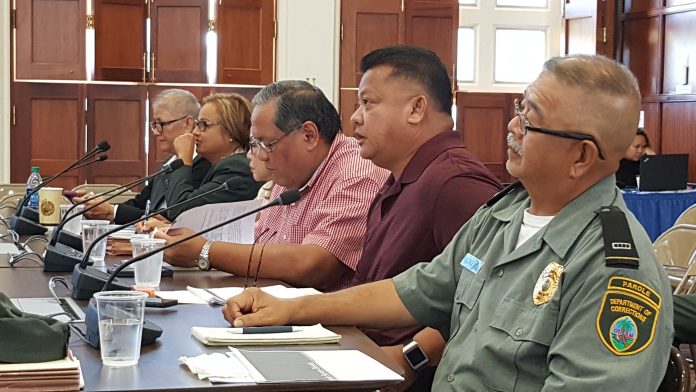 Short staffing and overtime taking its toll on morale, despite higher wages

Guam – It’s business as usual at Dept. of Corrections, and the department’s fiscal year 2019 budget hearing at the Guam Congress Building this morning reconfirmed a likely story. Overtime’s up, but staff and morale are down.

DOC Director Tony Lamorena told lawmakers the department has lost 40 corrections officers over the last year and a half, and that fatter paychecks aren’t enough to keep overworked people happy.

“I try and meet and do an exit interview with every officer that leaves DOC, and a good majority of them voice the quality of life concern,” Lamorena said. “Although they were getting money in overtime, they wanted more time with their family and the stress was really affecting their personal lives.”

Perhaps in keeping with the Calvo Administration’s recent austerity concerns, one iteration of DOC’s FY19 budget pitch asks senators for an increase of less than one percent than this fiscal year’s spending plan. At $26.7 million, DOC’s FY19 proposal probably wouldn’t even keep up with inflation. Another version of the budget proposal pegged DOC’s spending plan as high as $29.7 million, according to presentation documents. Various funding options Lamorena and his staff presented to lawmakers on Tuesday are still as much as 25 and 50 percent below DOC’s actual needs, according to testimony.

So ‘business as usual’ doesn’t always mean ‘all systems go.’ Overtime projections for next fiscal year are nearly $900,000 due to short staffing in various divisions. The Hagatna Detention Facility and Mangilao Adult Correctional Facility together are in need of a combined 76 corrections officers to help curtail overtime, according to DOC’s presentation materials.

Corrections’ mandate to keep inmates safe and secure while keeping the community safe from their crimes remains a tall order for DOC’s dwindling men and women in green. In recent years, debate over prison management has run the gamut. Politicians and pundits parsing the pros and cons of public and private prisons. The doling of arguments hinging on the need for a new prison versus those espousing the imperative of decreasing the existing prison’s population.  And the perpetual call for inmate reform and the diminishment of recidivism. Lately, candidate for attorney general Gary Gumataotao has even called for hard labor prison camps as a pathway to detainee reform and a deterrent to crime.

But changes in laws and policies and the construction of capital improvements take time. And it appears that work conditions at the Hagatna and Mangilao facilities face a more immediate crisis. DOC staffing level statistics show the department 35 percent short in manning the Hagatna Detention and Mangilao Adult Correctional Facilities, as required by standard operating procedures. The stats depict a department lacking the optimum 38 corrections officers per 12-hour shift at this pair of locations combined. That’s a total of 76 officers to cover each 24-hour period in order to nearly zero out overtime between the two facilities, while decreasing staff turnover, increasing personal leave, and bucking up staff morale.

Documents shared with PNC this morning showed that six new corrections officers are in the process of being hired and 18 are being recruited for the hoped-for addition of 24 new officers before any more drop out.