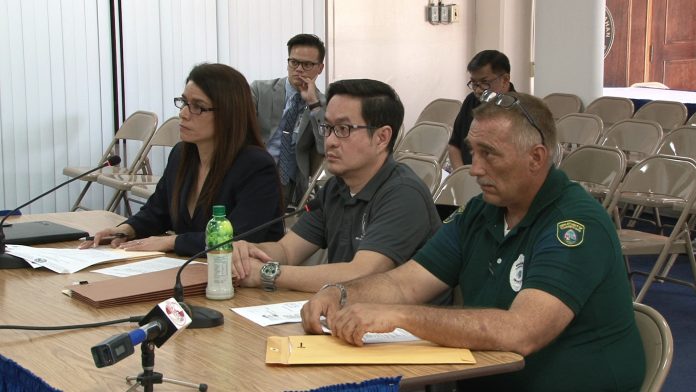 At least one corrections officer testified at a public hearing today for a bill that would authorize overtime payments that there is still outstanding “over-the-cap” overtime that’s separate from regular overtime.

Guam – While the Department of Administration says the $1.5 million in overtime checks they are distributing today should take care of all outstanding overtime obligations at the Department of Corrections, FOIA documents submitted by DOC paint a different picture.

“That’s why I’m disappointed that the director of corrections is not here today,” said Senator Frank Aguon Jr.

Department of Corrections Director Jose San Agustin was a no-show today at a public hearing on Senator Frank Aguon Jr.’s bill 301 which would authorize overtime obligations from prior fiscal years.

Senator Aguon says he’s disappointed because the Freedom of Information Act documents he just received last night from the director show that DOC has other obligations as well.

Who did show up was Department of Administration Acting Director Christine Baleto and Corrections Officer Corporal Richard Dahill. Baleto announced that $1.5 million in DOC overtime was paid out at 1 pm today.

“We just want to know is there anything else that hasn’t been paid because we keep getting surprises. It’s every other day it seems the number changes,” lamented Vice Speaker BJ Cruz, who is the legislative chairman for Finance.

“From my understanding … [we] received this information from DOC and this is supposed to take care of everything outstanding,” responded Baleto.

But according to Senator Aguon, many corrections officers have come forward about a separate overtime issue called “over the cap.” Corporal Dahill showed up today to talk about this.

“Each officer was, depending on the rank, only allowed so much overtime. After that amount, whatever the officer was allocated, it would be banked as, put ‘over the cap.’ Later in 2013, the cap was taken away, but they never paid what was over the cap,” explained Dahill.

When asked, Baleto said DOA is not aware of the outstanding “over the cap” compensation.

“You now have a new task of trying to figure out what this over the cap issue and to find out if there are from any other agencies because every other day–[Senator Aguon] introduced six bills the other day. GPD’s trying to take care of prior years for overtime as well. Every type of compensation. And we cannot run this way,” said Cruz.

Other outstanding obligations DOC has, but are not part of overtime, include maintenance services, civil service commission cases, and a $493,000 balance owed to the Guam Memorial Hospital.

But in terms of bill 301, Vice Speaker BJ Cruz, who has oversight on finance, said that since Baleto claims today’s overtime payment takes care of all prior year overtime compensation, and since the director of DOC failed to show up to correct the amount needed, he would take Baleto’s word for it.

“If [San Augstin] doesn’t think it’s important enough to be here then I guess it’s not. And If you assure me that it’s been addressed then it’s addressed. So this bill is moot,” announced Cruz.

Calls to DOC Director Jose San Augustin for comment were not returned as of news time.