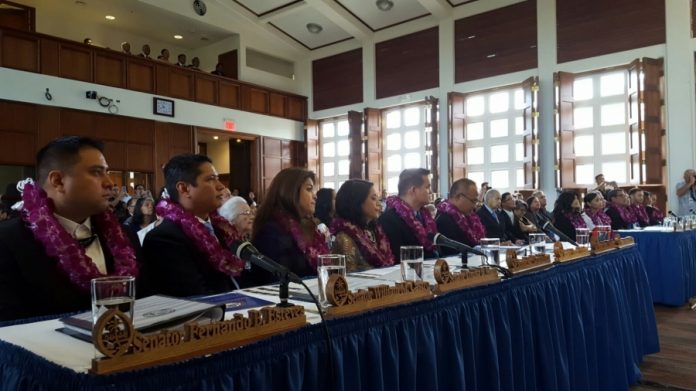 Three lawmakers say a shutdown of the legislature is looming come Monday –a consequence, they argue, of an 11th hour budget proposal from Senator Michael San Nicolas.

Guam – The latest bout of Democratic infighting is over the lawmaking body’s spending plan for the second half of the fiscal year.

Late Thursday, Senator San Nicolas, as Chairman of the Committee on Rules, submitted his proposed budget via resolution.

The measure outlines more than $4.2million in authorizations.

But what alarmed some senators was the language of the resolution that could potentially grant San Nicolas control of about half that amount.

Senators expressed to PNC that the provision in San Nicolas’ resolution could grant him the ability to transfer money within individual offices and standing committees, or withhold the cash altogether.

According to one long-time Democrat staffer, first-term senators are especially at risk of being affected by a Monday shutdown — as only offices with lapsed funds available from prior fiscal years or from outgoing senators in the previous term, have authority to spend money absent an approved budget.

The concern has prompted three Democrat senators: Dennis Rodriguez, Joe San Agustin, and Frank Aguon to counter with a continuing resolution that extends the spending plan for the first half of fiscal year 2017 instead of adopting the San Nicolas budget — objecting to the rules chairman giving little time to act on the matter, especially as the trio writes, “without discussion and input from the committee on rules members, nor a public meeting concerning the expenditures.”

Meanwhile, San Nicolas responded in a press release saying, “These leadership decisions are obviously going to generate internal friction. So be it. It is the right thing to do for our people and I am fully committed to staying the course, even if it requires difficult internal circumstances for a time.”

He added that Republican Senators Mary Camacho Torres and James Espaldon have expressed their support as well.