Guam – (May 13) The Festival of Pacific Arts Coordinating Committee, along with Governor Eddie Baza Calvo, Honorary Festival Chairperson First Lady Christine Calvo, the Guam Visitors Bureau (GVB) and Guam Council on the Arts and Humanities (CAHA) announced today that the countdown has begun for Guam to host the 12th Festival of Pacific Arts from May 22 – June 4, 2016.

Also known as the “Olympics of Pacific Arts”, this traveling festival is hosted every four years by a different country in the Pacific and will feature delegations from 27 participating island nations. FestPac was conceived by the Secretariat of the Pacific Community (SPC) to stop the erosion of traditional practices by sharing and exchanging culture.

“We are honored and very proud to host our brothers and sisters from these participating island nations across the Pacific, as we come together to celebrate and showcase our unique indigenous practices and culture through the arts,” said Theresa Arriola, FestPac Committee Chair and GVB Board Director. “On behalf of the FestPac Coordinating Committee and all the individuals already involved in the planning of this exciting event, we encourage the public to learn more about this exciting spectacle of cultural arts by visiting www.guamfestpac2016.com and to join us in preparing for FestPac 2016.”

The theme for FestPac 2016 is “What we own, what we have, what we share – United Voice of the Pacific.” The large-scale cultural event gives Guam an incredible economic and socio-cultural opportunity to truly showcase the arts and culture of the region through various exhibits, forums, performances and workshops.

In addition to the Government of Guam’s commitment, two Latte level sponsors, Bank of Guam and United Airlines, have pledged their support for this endeavor with $100,000 contributions.

The first official FestPac fundraiser, “Dinanña Kotturan Guahan” has also been set for May 27  at 6pm. The cost of the fundraiser is $50 and will feature a taste of FestPac with an hour-long cultural presentation and local cuisine. It will be held at the Sheraton Laguna Resort. 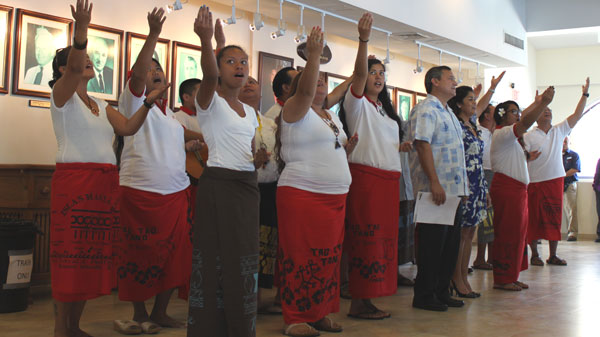