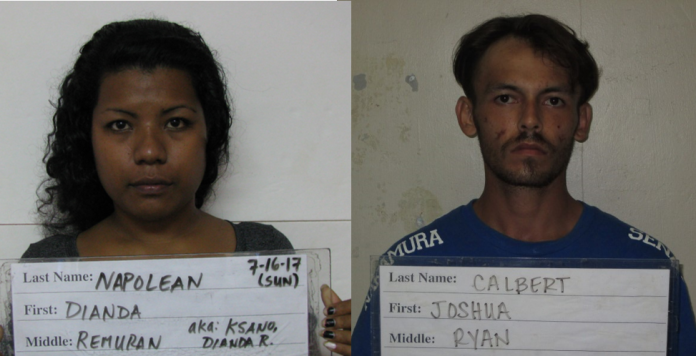 The pair was seen with a minor inside their vehicle while parked outside Jacky’s Bar in Hagatna.

Guam – “Property of Josh and Asri.” That is what was inscribed on a can of Similac, containing two clear resealable bags with ice and drug paraphernalia.

According to court documents, on Sunday, police officers were patrolling the Jacky’s Bar parking lot in Hagatna, when they noticed a parked car with three occupants. When the officer approached the vehicle, he noticed that the occupants began to move around a lot inside.

The report states that during the check of the vehicle the officer was able to see what appeared to be an improvised pipe in the back seat. The occupants were identified as Joshua Calbert, Dianda Napolean and a minor.

Calbert and Napolean were questioned and during that time police say Napoleon retrieved a glass pipe from her clothing. Calbert denied that the drugs belonged to him, however when asked if his fingerprints would be found on the pipes containing ice residue, police say he admitted that they would be found. Both have been charged with possession of a schedule II controlled substance.