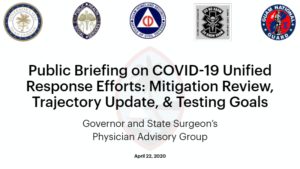 Governor Lou Leon Guerrero, during her daily online news conference on Wednesday, declared that there is light at the end of the tunnel.

Her physicians’ advisory team formally presented a revised outlook on the impact of the coronavirus pandemic on Guam and it paints a much more optimistic picture than earlier projections.

“What we have done is working. Making us comparable to Germany and lower than the United States — two of the most industrialized countries in the world. There is light at the end of the tunnel,” the governor said.

During the news conference, Dr. Felix Cabrera of the governor’s physicians’ advisory team, presented a view of that light at the end of the tunnel — a far more moderate outlook on the impact of the coronavirus than earlier projections.

“We have significantly flattened our curve. However, it’s not completely flat, thus a surge still looms in the distance. Albeit it’s now a much slower surge than previously, the threat to overwhelm our hospital system could occur in the fall,” the doctor said.

Dr. Cabrera also defended the initial dire projections made by the physicians’ advisory group, saying the threat at the start of the crisis was real.

“There was a very serious risk, there were 25 patients at GMH that had COVID. That was a very serious strain on GMH. And to insinuate in any way that the threat was not real is somebody who just lives in a shell and doesn’t understand what’s been going on in the globe,” he said.

Both the governor and Dr. Cabrera said the more moderate outlook on the impact to our island is due to the social distancing restrictions put in place at the start of the outbreak.

“I know that some in our community have argued that initial projections predicting a mass fatality rate of 3500 souls on Guam were wrong. We are all grateful that it was. But none of this was fate. It didn’t happen solely because we wanted it to or because nature was left alone to run its course. Lives were saved because we stayed home and stopped the spread,” the governor said.