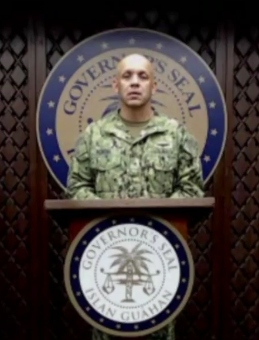 While sailors who tested negative will be allowed to stay off-base in quarantine at island hotels, Joint Region Marianas Commander Rear Admiral John Menoni, who attended the governor’s news conference on Wednesday, said sailors who test positive are being placed in isolation inside Naval Base Guam and they will not remain aboard the USS Theodore Roosevelt.

Military officials have not disclosed how many sailors off the USS Roosevelt have tested positive for COVID -19. But Rear Adm. Menoni this afternoon did confirm that they will not have to stay aboard the aircraft carrier. They’re being placed in isolation in single rooms with their own private bathrooms on Naval Base Guam and they’re being monitored daily.

“There is no contact at any time whether it is between the medical professionals that are doing those evaluations or even the folks that come by to drop off food for them. There is no interaction, no contact, in accordance with the standard social distance guidelines. The sailors who test positive are in isolation on base and not on the Roosevelt,” Menoni said.

The Governor said she is aware of the reservations raised by some in the community over allowing sailors who test negative to quarantine off-base and those testing positive to remain in isolation on base.

“I know there will be a small chorus of cynics who will oppose this decision but now is not the time for us versus them. While there are sailors on board who ship from every corner of the nation some of those sailors call Guam home,” the governor said.

Meanwhile, with the islandwide shutdown and social distancing mandates in place until April 13 and possibly longer, island residents are increasingly clamoring for relief — the $111 million in discretionary fund that is pending and as much as $930 in weekly unemployment benefits. Both are still weeks away.

“With the $111 million, we are working closely with the U.S. Treasury and the law says that after we become certified. So we have to give them a plan that they will certify. And once that’s certified, I think that within 30 days, we can see these funds coming in,” the governor said.

She added: “And as far as the pandemic unemployment benefits, when we get the program and the processes in place, which we are working on very diligently, we would be able then to get the funds. So I don’t have a specific date, but I am anticipating in the next couple of weeks.”

Of the Manila passengers who have been in quarantine for the past two weeks, the governor said 3 have tested positive.

As for the sailors off the USS Roosevelt who have tested negative, Adm. Menoni said they will be transferred to island hotels as soon as possible. He said the transfer will be carried out by military personnel exclusively.

The admiral also said that about 40 medical professionals from the Third Marine Expeditionary Medical Battalion will arrive on island within the next two days. He said they will provide help not only to the sailors aboard the Roosevelt but to the local community as well.