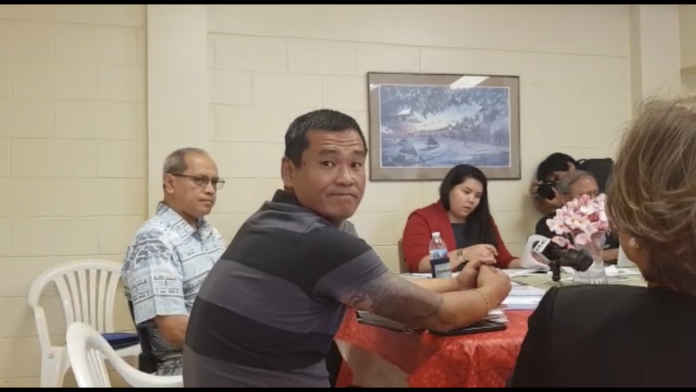 Guam – A huge sigh of relief for some 300 Guahan Academy Charter School students and their parents as a benevolent act is saving them from eviction.

Current crisis averted. That was the message given to the Council this morning at the emergency session. The relief came via Nan Chung Shin Trust representative, Dongman Chang, who said the company is an advocate of education both here and in Hawaii, and they never wanted to see the students displaced.

“We came to conclusion was the eviction notice will be rescinded from the school,” Dongman Chang, a representative of the trust said at today’s meeting.

GACS Board of Trustees Chair Fe Ovalles expressed the relief felt by everyone involved.

“Really we’re so grateful. because the board of trustees, as I’d mentioned to you in the last email I sent to you, that we have to split our outreach,” she told member of the Guam Charter School Council.  “And God bless you and the Shin Trust.”

As you may recall, the GACS Board of Trustees was handed an eviction notice on February 7th after missing two of its payments, totaling nearly a quarter million dollars. The agreement announced today came after GACS submitted a partial payment of $45,000 to Shin Trust.

“We’ve received two checks of $45,000—one in the beginning of the agreement, and one yesterday.”

The forgiven amount, added Chang, will be an in kind donation to the school. He said the trust hoped the agreement would alleviate a lot of the stress by the council, school, parents and students.

Now the students are able to ride out the school year at their current campus. School lets out on June 15th.  GACS must vacate the property by June 30th. The agreement means proverbial bullets were dodged for GACS stakeholders.  Students won’t need to transfer to another campus mid-school year.  No double sessions need to be held. But it also opens up a whole new set of questions, most prominently: what facility they would be using next year.

“Did I misunderstand it that after June, there would be no contract for sale and the school must find a new facility,” asked Council Member Frankie Toves.

The Shin Trust said come June 30th, the company will be once again taking over the property. Council Chair Amanda Blas asked Ovalles whether two weeks would be enough time for them to vacate the property.  Ovalles confirmed it would be.

Also of concern: what was the source of the $45,000 payment to GACS’ landlord?

“We have provisions in our budget…all of the facilities expansion. We budgeted for that. It’s all budgeted money in our books—so that basically is what will come to the allotment,’ Ovalles disclosed.  “I hope that this will be paid back again in the allotment process, and if there’s any issues with that, let us know.  But for now, that is all the money that we have.  We wish we had $145,000 today, but that’s all that we can offer.”

But DOE Chief Auditor Frank Cooper-Nurse, who validates the requested release of funds for the island’s charter schools, questioned the use of government funds for yesterday’s check. He went on record saying they will be reviewing the payment, because the funds used didn’t go through the established validation process.

For her part, Blas said the council will be doing an annual review of both GACS and the iLearn Academy Charter School, as is required by law. At that time, officials will be discussing the action plan GACS has for next year and beyond.   Meanwhile, the GACS board will be meeting with school parents tomorrow at 4 p.m. after PTO President Jolene Toves called for their transparency.