Guam – Thunderous action rocked the Guam Sports Complex Gym in Harmon during first round matches of the 2013 Docomo Pacific Men’s Futsal League played on both Wednesday and Friday evening.

A star-studded Guam Shipyard team that featured Jason Cunliffe and Ian Mariano – both on break from their professional club team in the Philippines – locked a 6-4 victory over the Rovers FC, a new futsal league team this season. Mariano scored three unanswered goals in the final eight minutes of play to finally put away the Rovers in a match that saw the lead exchanged between the two teams five times.

[The Southern Cobras Fred Alig prepares to start a play as Doosan FC defenders begin to converge on him during first round action of the Docomo Pacific Men’s Futsal League at the Guam Sports Complex Gym. The Cobras defeated Doosan 19-3.]

Mariano led all scorers with four goals and teammates Cunliffe and Vinicius Rodrigues each scored once for the winning team. Brian Torres, Jeremy Hare, Shawn Spindel and Eric Redona scored for the Rovers.

In other matches, last year’s runner up, the Crushers FC, edged another new futsal league team, the Ambassadors, 6-5. Jonathan Guerrero scored the eventual game-winner with three minutes left to go in the contest. Guerrero and teammate Jon Odell finished with two goals each. Jaime Ortega and Jesse Mesa also scored for the Crushers. Jeremy Hewitt and Juan Paredes each scored twice for the Ambassadors and teammate Nick Cabuhat contributed one goal. 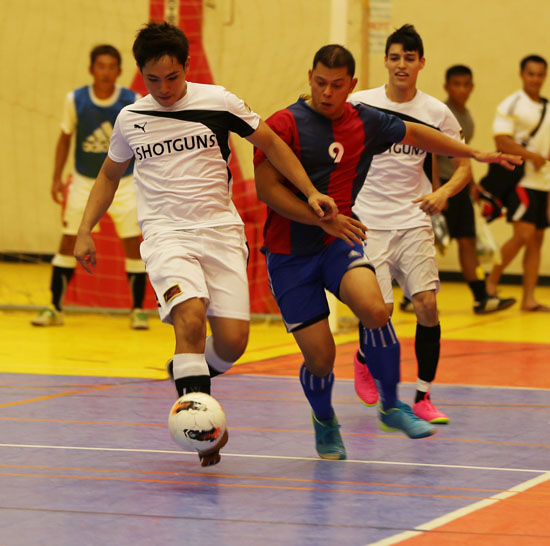 [The FC Shotguns’ Marvin Redona keeps back the Paintco Strykers’ Caleb Barretto from the ball during first round action of the Docomo Pacific Men’s Futsal League at the Guam Sports Complex Gym. The Strykers defeated the Shotguns 12-1.]

The Southern Cobras ransacked Doosan FC 19-3, led by Ashton Surber with four goals. Fred Alig, Jan Flores, Eddie Lee Lorenzo and Donovan Reyes contributed hat tricks in the win. Gerald Aguon, Adam Rivera and Cristian Surber each scored once to round out the Cobras’ tally. Despite the large goal haul by the Cobras, Doosan FC goalkeeper Raughley Alpet earned key saves including many on close-range shots and penalty kicks. Dustin Alger scored twice for Doosan and teammate Stanley Rice scored once in the contest. 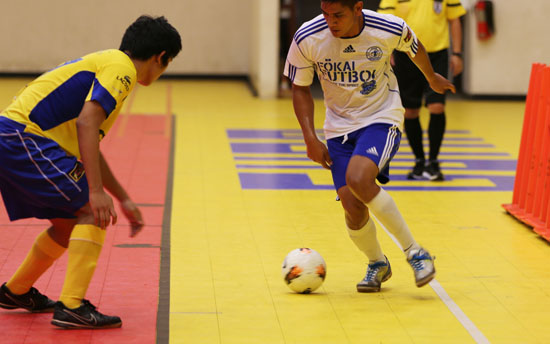 [Guam Shipyard’s Ian Mariano looks for an opportunity to get around the defense of Rovers FC’s Arnold Francisco during first round action of the Docomo Pacific Men’s Futsal League at the Guam Sports Complex Gym. Guam Shipyard defeated the Rovers 6-4.]