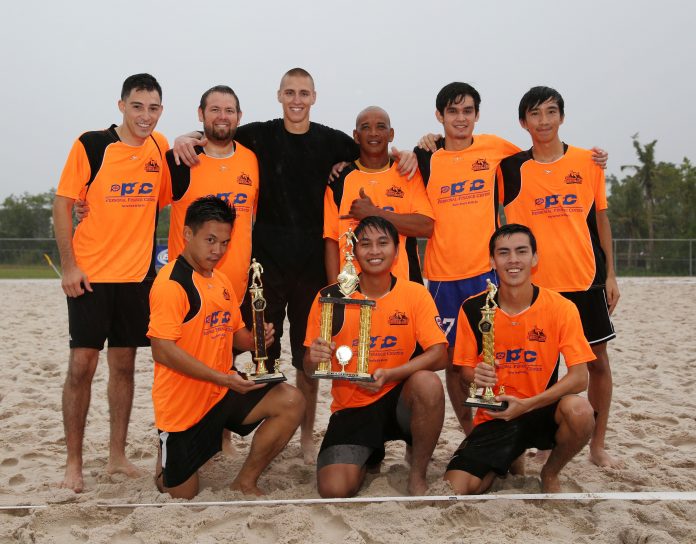 The Strykers, increasingly desperate for a goal, continued to leave gaps in its defense and allowed the eventual game winner from Odell with only four minutes left in the contest.

HARMON – The Crushers FC swept all top awards at the conclusion of the 2015 Land Shark Beach Soccer League, rallying past first-ranked team and last year’s champions, Strykers FC, 5-3, to claim the championship trophy, adding to its Fair Play and Golden Boot awards Sunday at the Guam Football Association National Training Center beach soccer court. The Crushers struck first in the final match with a shot from Christian Schweizer four minutes into the match, but the Strykers’ Bill Kerr, Scott Spindel, and older brother Shawn, quickly tacked on a trio of goals by the end of the 15-minute period to take a commanding 3-1 lead. After both teams played a scoreless second period, the Crushers took advantage of the Strykers’ defensive lapse in the final period, outscoring their opponents 4-0. Joshua Pangelinan scored the game-tying goal four minutes into the third period on a long-distance shot from behind the center flag, two minutes after teammate Jonathan Odell scored his first goal of the match. The Strykers, increasingly desperate for a goal, continued to leave gaps in its defense and allowed the eventual game winner from Odell with only four minutes left in the contest. Schweizer later added another goal with just a minute left to play, using his speed to needle through Strykers defenders for the final 5-3 score. The Crushers faced a tough road to the finals, requiring a penalty kick shootout with Quality Distributors FC to book their ticket to the finals. Odell and Pangelinan scored one each for the Crushers and Takefumi Inoue and Nick Roberto scored for Quality in regulation time for the 2-2 score before the shootout. The Strykers had a relatively easier outing in its semifinal match, outclassing Doosan FC 18-4 earlier in the afternoon. Scott Spindel led all scorers with five goals and Shawn Spindel scored four. Kerr and Caleb Barretto each contributed a hat track and Ross Awa shot in two. Thomas Castro scored the Strykers’ other goal. Ricky Tyquiengco, James Mendiola, Joshua San Agustin, and Cameron Lunod scored for Doosan. Doosan, ranked fourth going into league playoffs, upgraded to a bronze finish, edging Quality 9-8 in the consolation match. Thaddeus “T.J.” Atalig led the winners with a hat trick and Jason Sugimoto scored twice. Lunod, Leeray Zapatos, Arnold Torres, Jr., and Thomas Medler also scored in the win. Roberto scored three for Quality and teammates James Bush and Bradley Miller each scored twice. Brett Maluwelmeng scored Quality’s other goal. Following the championship match, the Crushers team was presented with the championship trophy, in addition to receiving the league’s Fair Play Award. The Crushers was the lone team to finish the season without any cautions or expulsions. Odell, the team’s leading scorer, also was honored with the league’s Golden Boot award. The Strykers went home this year with the runner-up trophy.