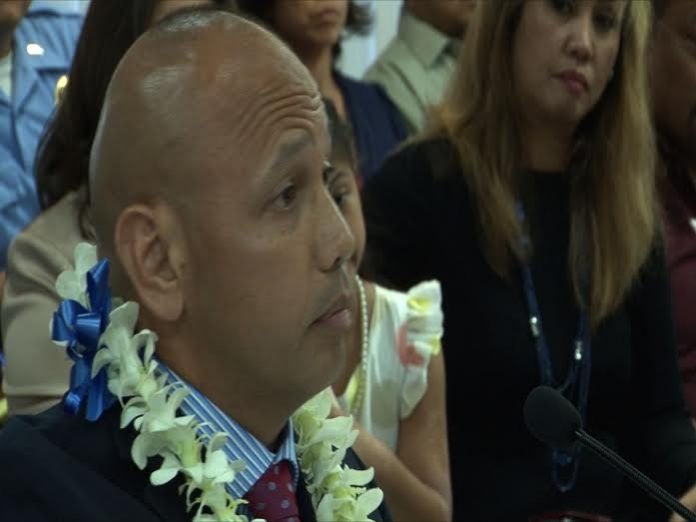 Some Officers Testified Saying Cruz is Uniting Factions Within The Department

Guam – The public hearing room was filled with supporters of acting police Chief Joseph Cruz. Officers testified saying that Cruz is bringing the different factions within the police department together.

Acting Police Chief Joseph Cruz received nothing but praise and high recommendations from those who testified during his confirmation hearing this afternoon. Cruz was a U.S. marine for 8 years and served in the Guam National Guard as the battalion Executive Officer or XO which is the second in command of an infantry battalion of over 600 soldiers.

“Mr Cruz performed exceptionally well displaying high competence confidence intelligence and dedication to task and purpose,” said GFD Chief Joey San Nicolas who served with Cruz in the Guam Guard. Guam Homeland Security Administrator Charles Esteves also served with Cruz in the guard. “I can attest to his technical aptitude and his proficiency in the planning of military operations. You know the battalion infantry we have 600 soldiers so given the size of the Guam Police Department it’s an easy task for Joseph Cruz,” said Esteves.

Cruz is also a long time police officer who even served in SWAT. “He has brought us together. He has brought this department where we have had a lot of infighting and a lot of finger pointing and we seem to come together and seem to gel together under his leadership. What he brings to the table is the knowledge the drive and the leadership which is sorely needed at the Guam Police Department. I think that you’re going to see a huge difference as a matter of fact you’re seeing the difference today. How long has it been to see us come together as a family as a unit. One united unit behind the acting chief right now,” said GPD Captain Mark Charfarous.

Cruz himself testified saying that he was looking forward to tackling the issues facing the police department. “While the current administration has worked diligently to increase the funding appropriated to the department based on Guam law and a study conducted by the Department of the interior in 2012 the department is still undermanned,” said Cruz.

Senator Frank Aguon Jr. says that Cruz’s nomination should make it to the next session which they are planning on having the week of August 10th.