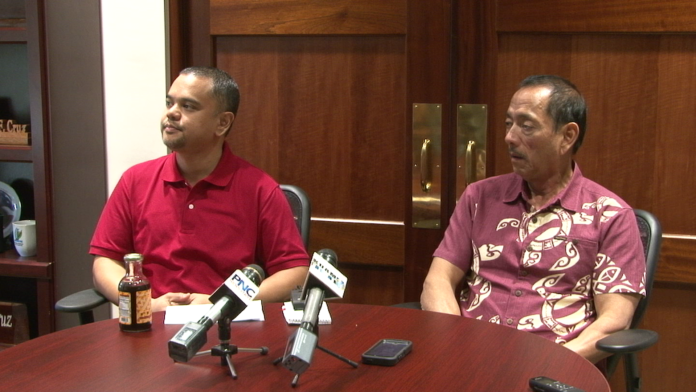 Guam – In the aftermath of an alarming Joint Commission accreditation report for the Guam Memorial Hospital, Health oversight Chairman Sen. Dennis Rodriguez Jr. and Speaker BJ Cruz held a joint press conference in which they slammed the GMH administration for what they referred to as a violation of their trust.

“I was willing to address those issues but now you’ve violated a trust. That’s the thing that hurts me the most is that I believed you and I was ready to do whatever I needed to do, including a tax increase,” said Speaker Cruz.

The Joint Commission quality inspection report was released to both democrat lawmakers Thursday after mounting pressure from the public and the legislature to disclose the findings.

“Now that we’ve seen the accreditation report, clearly it’s not all funding. Yes, there are some cases there that funding could have perhaps dealt directly with accreditation, but for the most part, it doesn’t have to do with funding,” added Rodriguez.

At the press conference and in a letter Rodriguez wrote to GMH CEO Peter John Camacho, the oversight chairman said he believed there was a deliberate attempt to withhold the information and “misrepresent” the facts. Calling it a “bad decision,” Rodriguez said he could only assume that GMH and Adelup withheld the information because they wanted to drive a message to the Legislature.

“To use this as a way to say that accreditation’s gonna be lost because of funding when clearly, when you see the report, it’s clearly, that’s not the issue,” argued Rodriguez.

The GMH administration came under fire following the revelation, through a press conference the hospital called for, that the Joint Commission issued a preliminary denial of accreditation pending appeal. The notice from TJC couldn’t have come at a better time for the Health Committee–hours after the press conference, an oversight hearing for GMH was held at the Guam Congress building.

A week later, a public hearing was held for Governor Calvo’s bill 230, a measure that proposes to repeal tax exemptions for the wholesale, banking and insurance industries and direct those funds to GMH.

While GMH fiercely pleaded with lawmakers to fund the hospital either through tax exemptions or tax hikes, they refused to divulge information in the report.

In follow up interviews with GMH, the media was repeatedly told that addressing the underlying issue of funding is what will solve the accreditation crisis.

In fact, before GMH agreed to release the report to both lawmakers under strict confidentiality, Cruz said he was nearly swayed to put aside his firmly established position on tax increases and even gambling. This ties in directly with the business community, which came out in full force, testifying against bill 230, arguing that it will no doubt upend the island’s economy.

The democrat lawmakers categorically pointed out that a majority of the issues cited in the report deal directly with patient safety and an apparent substandard leadership performance.

“It’s like having a drug addict sibling and mom keeps saying support them, support them. ‘You know they have children … house.’ And then you find out they’re having kids, they’re still doing drugs and you’re like, how can I help unless you’re willing to help yourself and take care of–why should the rest of the family have to suffer?” Cruz related.

Rodriguez said the issue is not about helping the hospital secure a dedicated source of funding–that has always been the goal–it’s about holding the hospital administration accountable.

“The Legislature would have no assurance that even with the money, repeat issues would have been addressed,” Rodriguez said in his letter.

Both lawmakers acknowledged that a funding issue exists, saying it’s indisputable GMH needs help, but how they will get that help and by how much will now be the point of contention. A roundtable meeting has been scheduled for GMH next Monday at the Guam Congress building.