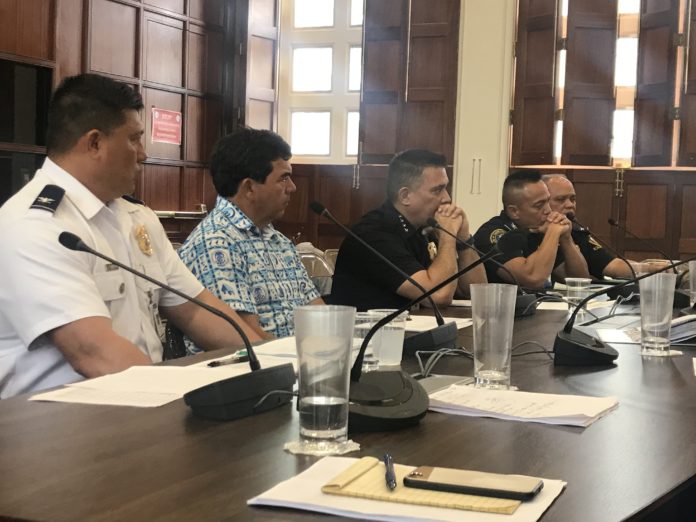 Guam – During a roundtable discussion with the legislature Tuesday afternoon Guam Customs and Quarantine officials said most of the drugs are coming in through the U.S. Postal Service. The legislature held a roundtable discussion with customs and quarantine this afternoon to talk about their need for more officers and how they can help with what seems like a growing drug problem on Guam.

“Because really seriously this drug situation has gotten completely out of hand and I don’t care how many Mandanna’s we have as well as they’re working they are being prescriptive. We need to be preventative at the border and stop it before it gets in because 18 pounds of cocaine or meth completely freaks me out. How that gets through anything is beyond me,” said Speaker B.J. Cruz.

Customs and Quarantine Officials say drugs are getting through our borders because Customs is poorly staffed. In fact, they pointed out that in 1998 they had 232 personnel protecting our borders. Today that number has been reduced to 141. This is a 40 percent decline over the last 15 years. This reduction in personnel and an increase in mandates related to Homeland Security post 9-11 have resulted in a reduction in the number of seizures

Speaker Cruz told customs officials that they should have been focusing on raising their fees or service charges in order to support their needs something they haven’t done in a long time. “Not having a sufficient number of people at the port or not having sufficient people at the airport and the fact that somehow we’re not covering the post offices and we’re not covering FEDEX and all the other delivery services the boxes that are coming in and everybody kind of looks at the appropriation chair and is like well why aren’t you giving them more money? You were supposed to be generating your own money and it’s been five years since we’ve approved the $8.39 this should’ve happened,” said Speaker Cruz.

The Speaker says they should have been asking for increases in their fees every year because in this fiscal climate he won’t be able to approve the $34 million-dollar budget they are asking for knowing they haven’t properly increased their fees.

“I don’t know when we’re going to be able to increase this and I don’t see being able to approve anything over the $14 million we gave last time,” said Speaker Cruz.

Customs has said that it needs an x-ray scanner at the port in order to scan containers as they leave the port on trucks.

“I’ve heard rumors by that time we’re kind of late is that true in your experience? I guess I want to know what kind of statistics or data do you have that could help us to understand where the gaps really are more specifically really because if we invest a lot of money in x-ray equipment that’s going to x-ray them as they are going out of the port and that’s not early enough then can we re-adjust that and get it before they’re offloaded from the ships? Or some other way that’s what I want to know,” said Vice-Speaker Therese Terlaje.

Customs officials say most of the drugs are actually coming into Guam via the post office. For example, a pound of crystal methamphetamine can be purchased in the West Coast of the United States for $3,000 or even less.

“If you could buy a pound of ice for $3,000 and you broke that down into 454 grams you would end up with close to 100 some thousand dollars in profit. And if you were to turn around and purchase the entire amount of a pound of meth at 3,000 dollars you would be able to purchase 49 pounds of methamphetamine. And all you had to do was put it in 49 different packages and send it through the mail and pray for one of them to make it through and still make your 100 thousand dollars with one pound,” said Assistant Chief of Customs and Quarantine Philip Taijeron Jr. adding, “The primary mode of smuggling at this point that we are aware of is through the post office. Last month we were told that ten pounds had come through. Come through the post office.”