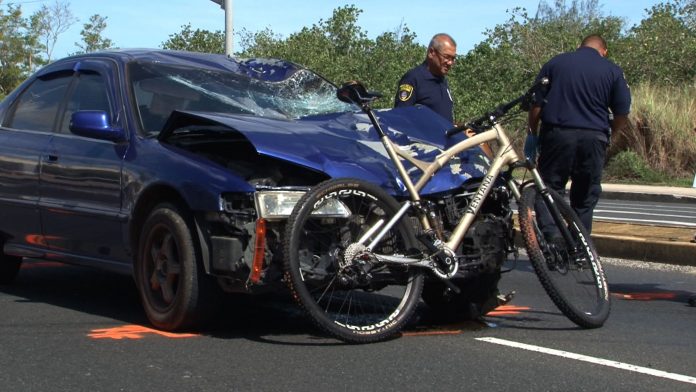 The cyclist, who has been identified as Eric Bell, was not on his bike at the time of the accident. He was reportedly walking his bike across a crosswalk.

Guam – A cyclist remains in critical condition at GRMC after he was struck by a vehicle along Route 1 near the Micronesia Mall. Preliminary reports indicate that the man, identified as Eric Bell, was on foot and was walking his bike across the crosswalk when he was struck.

The accident was reported just after 6 this morning. Guam Fire Department Spokesperson Kevin Reilly says GFD units responded to Route 1 northbound near Micronesia Mall for an auto versus bicycle incident with serious injuries.

Bell was reportedly unconscious and unresponsive when medics arrived on scene.

GPD Spokesperson Capt. Kim Santos says the cyclist was on the Fatima Dr. access road when he used the crosswalk near the Micronesia Mall to get to the opposite side of the street. Captain Santos says Bell was not on his bike at the time and was walking his bike along the crosswalk.

The vehicle, a 1995 Honda Accord was in the middle lane, traveling northbound at the time it collided with the pedestrian.

Officers with the Guam Police Department’s Highway Patrol Division were seen reconstructing the accident scene to determine the cause of the collision. They were placing markings on key areas on the roadway to collect evidence, such as blood spatter, debris, as well as conducting impact analysis and determining the final resting place of the cyclist.

All northbound lanes on Route 1 from the Route 16 to the Route 3 intersections were blocked off for several hours this morning as the Highway Patrol Division conducted a crime scene investigation.

No arrests have been made. Captain Santos says the case remains under investigation.