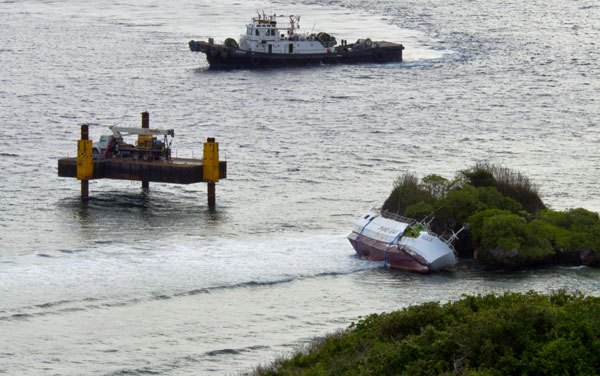 A contract salvage team will utilize an on-site barge and crane to disassemble the vessel in preparation for transport to shore and proper disposal. All recoverable hazardous materials have been removed from the vessel, which ran aground Feb. 13.

“This final stage shows the collective effort and dedication of the Navy and the unified command striving towards a common goal of returning the environment back to its original state,” said Cmdr. David Ellis, executive officer of U.S. Naval Base Guam. “The professionalism and dedication of all partnering agencies during this operation have been incredible. It is a great testament that when an incident occurs, teams will work together to respond quickly and effectively.”

Protection of the environment remains a top priority for Navy officials and the unified command.

The unified command consists of representatives from Naval Base Guam, U.S. Coast Guard Sector Guam and the responsible party.  Other agencies that have been involved in all aspects of planning from the standup include Joint Region Marianas operations department, Naval Facilities Engineering Command Marianas environmental personnel, NOAA, Guam Fish and Wildlife Service, Cabras Marine and Osroco.