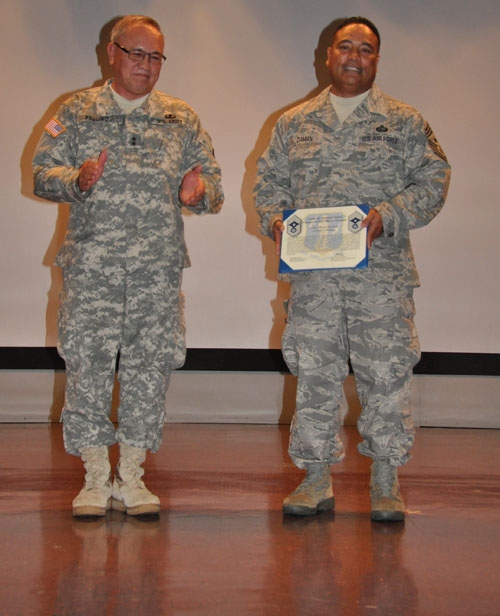 Guam – Chief Master Sgt. Gerard Damian was recognized as the newly appointed Command Chief Master Sergeant of the Guam Air National Guard during an assumption ceremony at the Andersen Air Force Base Meehan Theater on Dec. 1.

“As the command chief, you will be representing the command at all levels, and at certain times and occasions, will be acting on behalf of the entire organization,” said Maj. Gen. Benny M. Paulino, The Adjutant General of the Guam National Guard.

“I challenge you to continue to develop your knowledge base of the Air National Guard’s institutional management practices, the challenges the organization is tackling, and those it will be facing.”

With a command over 400 Airman-strong, Damian takes the helm as the fifth Command Chief of the GUANG enlisted force. He started his military career in 1982, serving seven years in active duty with the U.S. Navy. He holds more than 15 years of experience in the Air Guard where he has progressed through the ranks steadily and with many accomplishments.

Col. Johnny Lizama, commander of the 254th Air Base Group, states that Damian brings a unique background of more than 22 years in the private sector combined with his military experience as prior retention non-commissioned officer.

“My goal is to ensure that we take care of the morale and welfare of the enlisted Airmen,” said Damian.

He plans to tackle quality of life issues and concerns of the enlisted force to include recruiting and retention, awards and decorations, career development, promotions, force development and readiness.

He will also serve as an integral piece in leading programs such as the Family Readiness Group, Airman of the Year, TAG Cup, and Hometown Heroes.

“Ultimately, I am the voice of the enlisted corps,” said Damian.

Damian has a proven record in giving back to the island both within his career and his personal service commitments, which will serve as an invaluable asset as he serves as the new command chief.

“He is an active member of the community and will definitely be able to tell the Guam Air Guard story,” said Lizama.

He is the coach of the Orange Crushers U14 Division and the San Vicente boys middle school soccer team. He is actively involved in his children’s sports team the Mangilao Mariners little league baseball team and the GTA Raiders football team. 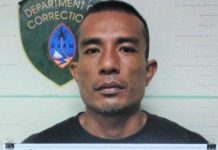