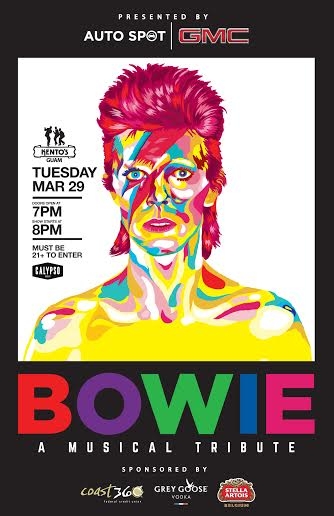 With just the beer light to guide you, find your way down to Kentos next Tuesday March 29 for a David Bowie tribute band celebration featuring some islands best musicians.

Guam – Are you a David Bowie fan or a fan of music in general? You’re in luck because next week Tuesday, beginning at 8pm, the popular club Kentos will host a David Bowie tribute night presented by the Calypso Group and Guam AutoSpot.

With just the beer light to guide you, find your way down to Kentos next Tuesday March 29 for a David Bowie tribute band celebration featuring some islands best musicians.

“David Bowie just passed a few months ago, so we wanted to pay homage to his outstanding career. He’s been making music for five decades, has a high catalog we have a bunch of talented musicians on island, [we] just wanted to pay tribute,” said Jonathan Jose, one of the even coordinators.

Beginning at 8 p.m., and promising to be as loud as thunder, various musicians will join together to pay tribute to the one and only David Bowie. Leading off the night is local band rich society–with Mike Hartendorp, Rich Borja on acoustic and Burt Delgado on bass, Rob San Agustin on drums and Doug Chan. Mike Hartendorp talks about his upcoming performance.

The Calypso Group and Guam AutoSpot present the event. Seating is limited to 160 [people] so make sure you get your tickets first. To get tickets you can call the calypso office or go into the Guam AutoSpot location in east Agana. Hartendorp gives a preview for what the music event will feature.

“It’s going to be all the hits and all the songs that were popular and the ones that people normally associate with David Bowie are going to be played, there might be a few surprises in terms of song choices but one of the most interesting things is we were able to fill up an entire show with just popular songs of his, which is a testament to how good all of his songs were, so we have about 20 songs that i at least heard of,” said Hartendorp.

Tickets are 30 dollars apiece and will go on sale tomorrow. Those interested in tickets can call the calypso group at 989-2015 or head into Guam AutoSpot in east Agana.