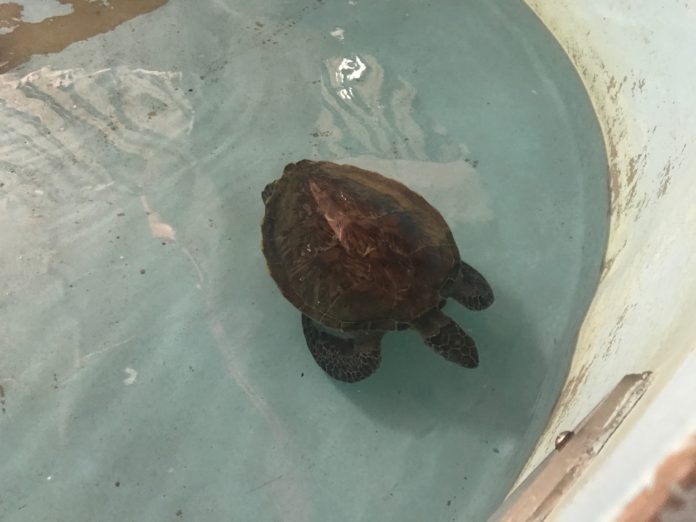 Guam – The Department of Agriculture’s Division of Aquatics and Wildlife Resources has rescued two sick and injured green sea turtles who are now both being nursed back to health at the Underwater World. If all goes well, the endangered species will be released back into the wild.

“The first one came in the day after Christmas and that one we found out about through the conservation officers. They received a phone call from a good Samaritan who just happened to be walking the beach,” said DAWR biologist CJ Cayanan.

Specifically, the turtle was found at the beach at Ga’an point in Agat and it appears that it had been shot by two spears. In fact, it has a wound near it’s left front flipper and one on it’s head.  The second turtle was found by a DAWR staff member who was doing a routine fishing survey.

“He stopped by Talofofo bay and looking down on the bay he noticed something that looked like it could possibly be a turtle on shore on the beach and so he went to check it out and he found the sea turtle there and she didn’t look like she was in that great of a condition,” said Cayanan.

The turtle was dehydrated and emaciated as if it hadn’t eaten in a long time. Both turtles are juveniles, so they can’t tell their genders yet. Both turtles are now in the hands of Underwater World Curator Mike McCue.

“Obviously there’s not a lot of aquariums on Guam or even in the region. So not too long after I came to Guam and Underwater World we realized that we had a good holding space if there were ever any sick or injured sea turtles,” said McCue.

And they have been working with the Department of Agriculture to help sick or injured sea turtles ever since.

“We’re really happy to do any kind of help we can for the environment. Obviously, that is a big part of our goal and our mission here on Guam is to educate people and get them excited about the environment and endangered species like the sea turtles,” said McCue.

McCue said they ran rounds of anti-biotics on both turtles and began nursing them back to health which involves things like re-hydrating via intravenous therapy and tube feeding.

“And the next step is we’re just really waiting for them to start eating on their own and acting like a normal healthy turtle again,” said McCue.

If they start eating on their own and start gaining weight both turtles can be released back into the wild. This is something both Underwater World and the DOAG’s Division of Aquatics and Wildlife Resources are hoping will happen.

“People think there are a lot but those numbers are really little. So, we want to try and be able to save our sea turtle population and make it grow,” said Cayanan.

Out of the two turtles the one found at Talofofo bay appears to have a good chance of survival but unfortunately the one with the two spear wounds may have a more difficult time pulling through. Only time will tell until then, both the Department of Agriculture and Underwater World remain optimistic.