Guam – Inochi Recella’s speed and finishing mentality worked against the visiting Rizal Football Association U14 team, as he scored all four goals in the Wings FC’s 4-0 victory in a Day 2 match in the U14 division of the 2013 Pacific Summer Invitational Football Tournament at the Guam Football Association National Training Center.

Recella’s speed down the left flank helped the Wings FC take a 1-0 lead at halftime. Recella struck again early in the second half, connected on a Sean Evans long pass into the box for the 2-0 advantage. RIFA’s starting goalkeeper Joshua Gatchalian, who tried earnestly to stop the shot, left the game with an injury following the play. Moments later, Evans found Recella again for another goal. Recella later received a pass from Yae Kawauchi and launched a right-footed shot from the left side that snuck into goal for the final score.

[ Quality Distributors FC’s Leon Morimoto leads the charge to clear the ball away from Rizal Football Association’s U14 team during a round robin match in the U14 division of the 2013 Pacific Summer Invitational Football Tournament. RIFA defeated Quality 7-2.] 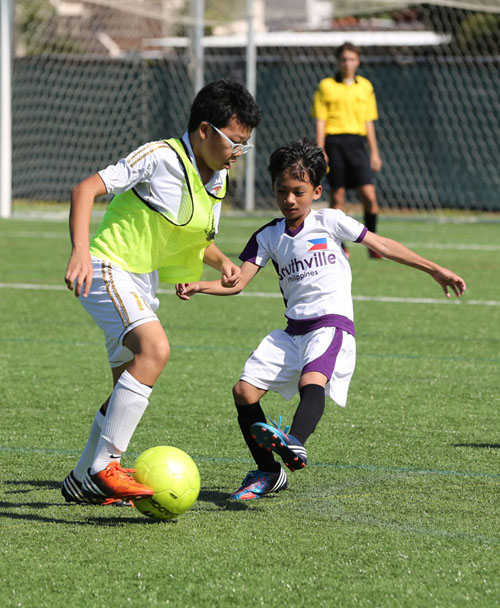 [The Tigers’ Seung Min looks to get past the defense of Southville International School’s John Magnata during a round robin match in the U12 division of the 2013 Pacific Summer Invitational Football Tournament. Min scored 13 goals in two matches, as the Tigers defeated Southville 9-1 and the Wolverines 7-2.]

In the U17 All-Girls Division, the Doosan Lady Crushers enter the playoffs as the first place team, picking up a 12-1 win against visiting Southville International School from the Philippines and a 5-1 win over Quality Distributors Red. Against Southville, both Andrea Odell and Colleen Naden finished with a hat trick. Maria Abbey Iriarte and Skyylerblu Johnson contributed two goals each. Krystiana Martinez and Kaeliana Taitano also scored for the Crushers. Jayda Mendoza scored Southville’s lone goal. Against Quality Red, Iriarte scored twice. Martinez, Naden and Odell also contributed goals in the win. Quality Red’s lone goal came on a Crushers own goal.

Quality Distributors Blue move into the playoffs as the second-ranked team with a 5-2 win over their Red counterparts and 10-0 against Southville. Kayla Kinney scored a hat trick in both victories. Paris “Mames” Blas scored once in each game. Tianna Sakaba scored Quality Blue’s other goal against Quality Red. Raven Aguon scored both of Quality Red’s goals. Against Southville, Quality Blue’s Aubrienne Pangindian also finished with a hat trick and teammate Tanya Flores completed a brace before the final whistle. Rhia Pangindian scored Quality Blue’s other goal. 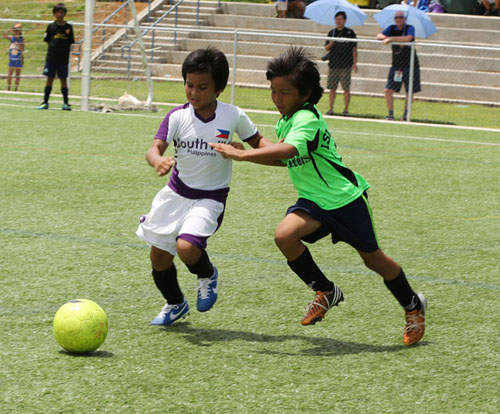 [The ASC Islanders’ Gabriel Tan fights with Southville International School’s Samuel Gawat for possession of the ball during a round robin match in the U12 division of the 2013 Pacific Summer Invitational Football Tournament. The Islanders defeated Southville 6-2.]

The playoffs begin at 9 a.m. with the U14 division teams taking over both the lower and upper turf pitches. The Wings FC play Community First on the upper pitch and the lower pitch will pit RIFA against Quality Distributors FC. The winners of each game move on to the championship game at 4 p.m. The consolation game is scheduled for 2 p.m.

Playoffs for both the U12 and U17 All-Girls divisions will begin at 12:05 p.m. In the U12 division, the Wings FC play Southville, followed by the Tigers against the Wolverines at 1:15 p.m. The winners move on to the championship game at 4:35 p.m., while the losers play in the consolation game at 3:25 p.m.

The Doosan Lady Crushers will play Southville at 12:05 p.m. in the U17 All-Girls division, followed by Quality Blue against Quality Red at 1:15 p.m. The winners will move on to the championship game at 4:35 p.m., while the losing teams play in the consolation game at 3:25 p.m.

Admission is free to watch the matches. Following the playoffs, an awards ceremony will be held for all the team at GFA.