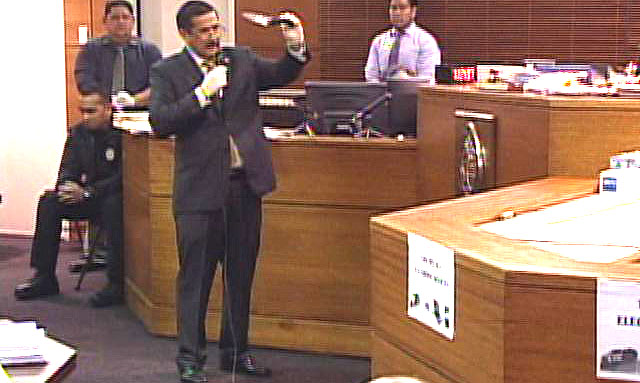 Guam – The knife that was used to murder at least 2 tourists and injure several others was displayed in court this morning in the ongoing Chad DeSoto murder trial. The kitchen knife was bent at a 90 degree angle. It is the weapon Chad DeSoto is accused of using to stab 2 people to death on February 12 last year.

US Navy Load Master Nicolas Dismang took the stand and said he saw the same bent knife lying on the ground next to a group of Japanese tourists who were injured.

Dismang was with a group of friends walking the Tumon strip when the entire event happened. He says he immediately administered first aid, attending to the elderly Japanese woman first. “But there was nothing I could do for her. She was already deceased,” he said in court, explaining that he then went to the younger Japanese woman who had been stabbed and applied pressure to her wounds until medics arrived.

Meanwhile, the first of two Australians also testified in court. Tony Richardson says he witnessed DeSoto stabbing the victims and then yelled for everyone to get away. After DeSoto was subdued, he said he went back to the victims and watched the elderly woman take her last breath as she quickly slipped away.