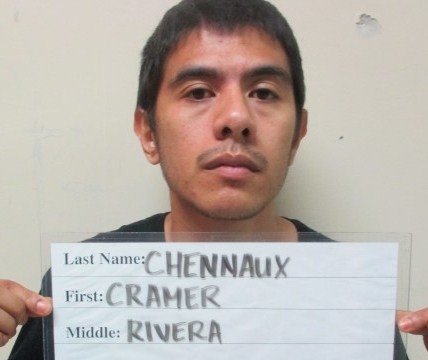 Cramer Rivera Chennaux allegedly jumped the hotel balcony and fled from authorities during the drug bust.

Guam – A 28-year-old man is facing drug possession charges in federal court for allegedly dealing drugs out of a hotel room.

Court papers say that DEA agents received a tip that Cramer Rivera Chennaux had a pound of methamphetamine or the drug ice at a hotel room inside the Holiday Resort.

When DEA agents and Superior Court Marshals went to pick up Chennaux on an outstanding arrest warrant, Chennaux jumped the balcony onto an adjacent building then fled to the Matapang Beach area.

But inside his room, DEA agents say they found 15 grams of ice, drug paraphernalia and a Sentry safe. After obtaining a search warrant, agents seized $7,200 in cash from the safe as well as 148 grams of ice.

Chennaux was charged with possession with intent to distribute methamphetamine. His next hearing is May 17 at the District Court of Guam.