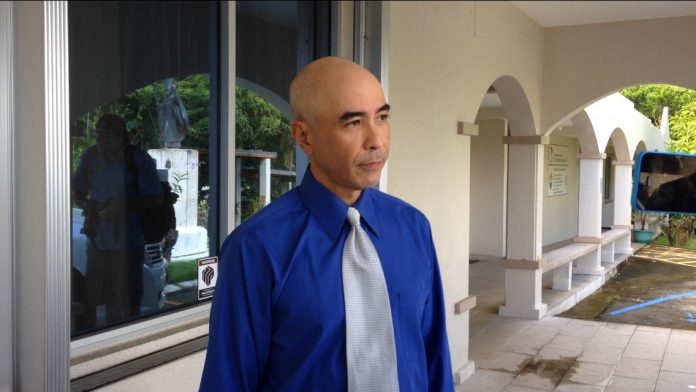 John Toves holds a press conference at the Chancery Office where he attempts to meet with Archbishop Apuron to confront him with his sex abuse allegations.

Guam – Staying true to his word, John Toves, the man accusing the Archbishop of sexually molesting a relative, went to the Chancery Office today to confront Archbishop Anthony Apuron, but he met instead with the Archdiocese’s Sexual Abuse Response Coordinator Deacon Larry Claros, who defended the Archbishop.

“I have no financial gains to make. I welcome him to sue me and take my house,” Toves proclaimed.

John Toves has opened a can of worms by publicly accusing Archbishop Anthony Apuron of sexual abuse. But some have questioned his motives. For one, Toves says he’s not the victim, it’s his relative. Toves believes the silence has to do with the Chamorro culture.

“Unfortunately our culture is not permitting them to come forward without retribution from some other party or their relatives or the Church,” he says.

Now on island, Toves was hoping to confront the Archbishop directly. Toves has two goals. The first is for two of the Archbishop’s perceived adversaries Msgr. James Benavente and Father Paul Gofigan to be reinstated to their previous positions and second is for the Archbishop to step down. Asked whether he believes the Archbishop will give him what he asks for, Toves says no.

While at the Chancery Office waiting for the Archbishop, Chancellor Father Adrian Cristobal stepped out to inform Toves that the Archbishop was not available. Toves instead asked to meet with Deacon Larry Claros, the Archdiocese’s Sexual Abuse Response Coordinator.

Toves was allowed to meet Claros, but the meeting lasted just a few minutes. When Deacon Claros stepped out, this is what he had to say.

“These allegations against the Archbishop, they’re very serious. Therefore we’ll just go ahead and, the spirit will eventually put an end to this and there will be justice done,” Claros stated. “I do believe and very confident that truth will prevail.”

Asked whether Claros believes the Archbishop is innocent, he said, “Oh, for sure. For sure.”

PNC: “You believe that he’s innocent yet you’re investigating these allegations?”

Asked to clarify his role, Claros says as the Sexual Abuse Response Coordinator, he has met with a review board committee and they had determined that there is no need to conduct an investigation.

“The committee is looking more as where’s the victim so that, because of our policy, it is the welfare of the victim that needs to be attended first and foremost,” Claros explains.

Toves: “You can tell how ill-set-up this supposed mechanism is and most notably his words: it’s not an investigation … he’s supposed to be the independent–their claim is that he’s the independent role, but yet he’s speaking for the Archbishop?”

Toves says since going public, he’s spoken with at least 7 individuals who have complaints against the Archbishop, but he could not disclose whether they were sexual in nature. The Archbishop meanwhile, maintains his innocence and says he plans to file for defamation.

The Archdiocese has also released a statement:

“The Archdiocese of Agana acknowledges receipt of the concern of Mr. John C. Toves. The established policy of the Archdiocese, namely the Policy on Sexual Abuse as posted on http://www.aganaarch.org, is being adhered to. Pursuant to this policy, and to clarify the issue, the matter is currently under review.”