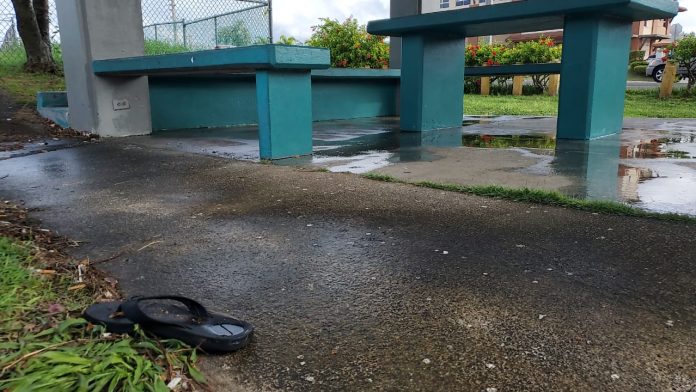 A dead body was found in one of the concrete pavilions next to the tennis courts at the Tamuning park this morning.

Tamuning mayor Louise Rivera told the Pacific News Center that a homeless person came to her office shortly after 7 a.m. this morning and reported to a staff member that one of his friends “did not wake up.”

Mayor Rivera said that it appears that the dead man was another homeless person. She did not know the cause of death or his name. However, the mayor said there were no obvious signs of injury and she did not think foul play was involved.

Scott Aguon, a homeless man at the park, told the Pacific News Center that the dead man was his cousin John Aguon.

“We spotted my cousin and we went to him to go drink coffee and that’s when we noticed he was dead. And my cousin called the fire department and my friend Ken called the mayor’s office and from there on they confirmed it but they chased us away. So we couldn’t say anything or do anything to contact the family or anything,” Aguon said.

Sgt. Paul Tapao, GPD spokesman, said crime scene investigators were called to the scene and an investigation to determine the cause of death is underway. He did not confirm the man’s identity

The body was removed shortly after 8 a.m. and brought to the medical examiner’s office for an autopsy.