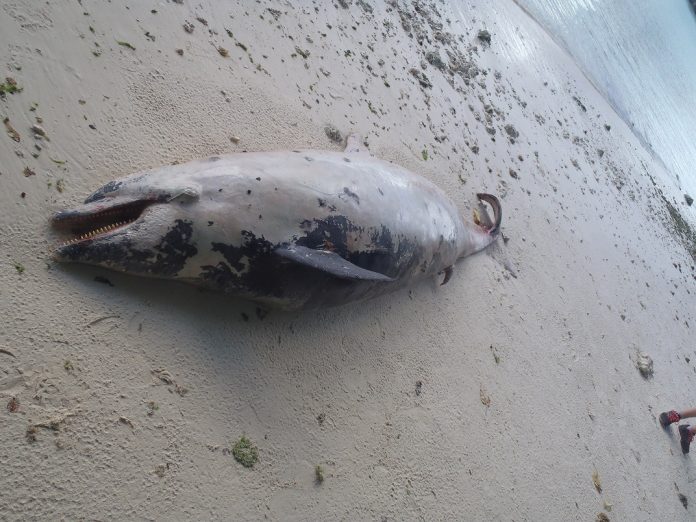 Guam- Over 3 months after a dead sperm whale washed up along Turtle Cove reef in Yona, a 10 foot dead dolphin washes up on the shores of Tumon Bay.

Department of Agriculture Biologist Brent Tibbatts says a fisherman sent him a picture of a dolphin floating off-shore in Tumon on Saturday. Other people also sent him pictures of the dolphin washing up on shore by Fujita road before it ended up near the Reef hotel yesterday morning [Monday]. Tibbatts mentions when they responded to the stranding, the marine mammal was already bloated and badly decomposed. Its internal organs were also coming out of its mouth. However, he notes there were no obvious signs of wounds and all of its fins and jaw were intact.

After taking measurements, pictures and collecting data, he says he pushed the dolphin over the reef to let mother nature take care of it. He says he is now working with NOAA to identify what kind of dolphin it is and how it died.

Tibbatts reminds people to not touch dead marine mammals because they can pass diseases on to humans and federal laws protect them. He adds Guam usually averages 1.5 strandings annually. Almost 40 strandings have been recorded over the last 15 years.