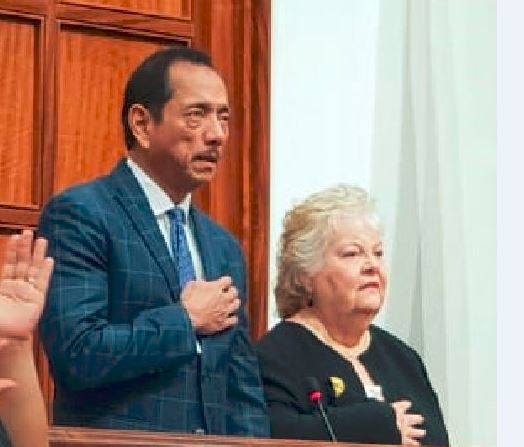 Guam – On Wednesday Gov. Calvo sent a formal letter to Speaker and Appropriations Chairman BJ Cruz asking for a little guidance and relief in tracking the arcane art of fiscal year  budgeting at the Guam Legislature.

The Governor’s letter arrived in Speaker Cruz’s inbox around lunchtime, following  another grueling morning of figuring out the forest for the trees.

It can be difficult, for those of us watching, to keep track of the amendments that are being discussed.

In fact, a number of times in these past two weeks of budget session, senators have had to recess to clarify what amendments they are voting on.

PNC knows the feeling. Verbally, collectively, and via text and email, Pacific News Center has been asking Speaker Cruz’s Office of Finance and Budget, Senator Regine Biscoe Lee’s Committee on Rules, and the office of the legislative clerk for help in tracking the daily changes  to a rapidly evolving budget.

We are told that in an atmosphere where senators themselves have difficulty keeping up with amendments (much less amendments to amendments), legislative staffers are piecing together a timely and effective way to share that information with the public—summarizing it into a daily digest, while knowing that  twice daily would be better: once at noon and once before evening news deadlines.

Ever since the refurbished Guam Congress Building reopened for the swearing in of the 34th Legislature, public officials, news junkies, social media pundits, and political hellhounds have enjoyed high-quality LIVE digital access to public hearings, legislative debate, and even the budgeting process, due to the facility’s new and improved audio visual multichannel broadcasting system.

And sometimes the Facebook set even claims to catch senators with their pants down in high definition, because they allegedly failed to do their homework and are cribbing on their cheat sheets!

But high tech doesn’t always translate to public understanding. For news reporters, covering a session or a hearing and publishing or broadcasting an accurate story on deadline is challenging enough. But the advent of the General Appropriations Act of Fiscal Year 2019 has arguably taken the tracking process to a whole new level of managing chaos, forcing time-conscious followers to ask busy senators and staffers for clarification. The constant refrain: “What just happened?”

In the interest of promoting a better understanding of what senators are discussing…I am asking that senators make public the amendments that are introduced along with a voting record at the end of each calendar day.

It is my understanding that at least one reporter has asked the same question so that their news agency can accurately report the activities of senators during budget session to the public.

That reporter is this writer.

Ever since it became apparent that the Trump Administration’s federal Tax Cuts and Jobs Act would be chomping a $145 million to $160 million chunk out of Guam’s FY19 budget, the Democratic legislative majority and the Calvo Administration have been at virulent loggerheads over how to make up the difference.

It’s a combustible situation which makes the budgeting process more challenging than ever to untangle, much less report clearly.

Amendment after amendment and debate after debate over whether to cover $150 million in shortfalls with cuts, new taxes, new debt, or gubernatorial  spending authority. All of this pressure arrives in a gubernatorial election year with five folks running for governor, two of them now debating the budget as sitting senators, mere weeks before the primary, the public in an uproar over every proposal to fill the looming fiscal year void.

One returning senator suggested they’re a doggone dirty double crosser, no matter what solution they offer. And a veteran legislative staffer told us that the FY19 is the most difficult Guam budget in the last decade.

Public officials and the public at large  follow the budgeting process as closely as they can on their televisions and portable screens. Reporters follow it inside an air conditioned press box with a wide-open view to LIVE proceedings. Senators themselves pace the floor of the legislature, desks piled high with amendments and briefing books.

Try as a newsman may to follow the action onscreen, online, or on site with smatterings of undated, unlabeled amendments and outdated dog-eared budgets, while monitoring the shorthand legalese of collegeal lawmakers and their legislative staffers, the mission is difficult at best.

Yes, the best one can do is to keep reporting whatever one can squeeze out while hoping that equally busy senators and staffers can somehow find the time to summarize the day’s proceedings in a way that makes sense to the gumshoe reporter as well as his audience.