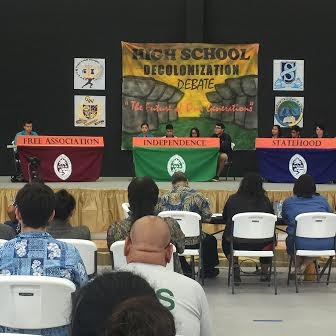 The debate was held at Tiyan High and it featured students from various GDOE high schools. The students were broken down into three groups one for free association one for independence and one for statehood.

Guam – The Governor’s office and the Commission on Decolonization facilitated a student debate on decolonization.

The debate was held at Tiyan High and it featured students from various GDEO high schools. The students were broken down into three groups one for free association one for independence and one for statehood.

“We may fear that we will lose our citizenship and federal programs but if you look at the Federated States of Micronesia also known as the FSM they have their own passport their own citizenship yet they can travel to anywhere in the United States without a Visa and they can still obtain their federal help,” said Fredalyn a student from Tiyan High who represented the free association group.

“With independence we will be able to have more control and finally vote for all of our leaders we can sign our own treaties and make deals with the countries we want to have relationships with. We will finally have the ability to make decisions for ourselves. Some think we will be poor but there are so many things our government can do to make money as an independent nation. For example we can have the military pay for the land they use,” said Peter Cruz of Tiyan High.

“Increasing tensions in the Asia pacific region has highlighted the importance of Guam’s strategic location. The excalation of these current events have created the urgency for statehood. which means the ability to govern ourselves as long as we don’t conflict with federal regulations or interests,” said a GW High student who spoke on behalf of statehood.

Governor Eddie Calvo has said that he would like Guam to hold a vote for self-determination during this year’s election in November.