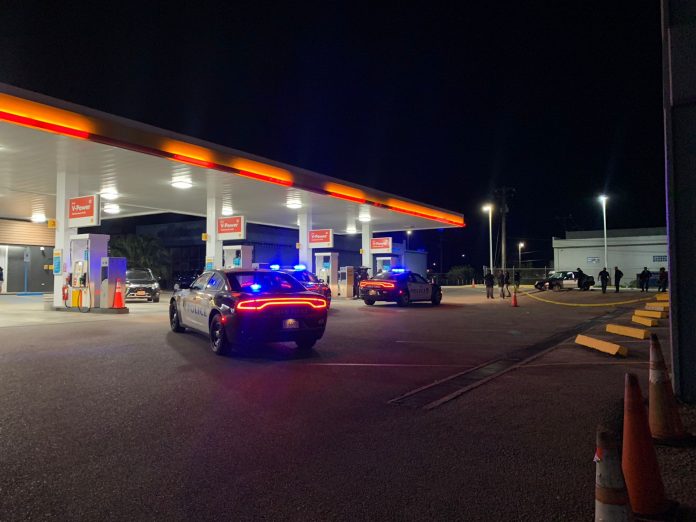 A police shooting in Dededo last night resulted in the death of “a member of the public,” according to a press release by the Office of the Attorney General.

PNC’s Devin Eligio has more on this story…

A man armed with a slingshot was allegedly gunned down by police outside this Dededo Shell Gas Station. Witnesses say that when the man attempted to run over a police officer, an officer opened fire.

In a video circulating social media, a witness described the events leading up to the shooting incident that occurred here last night.

At around 8:00 pm last night, Guam Police Department officers responded to a phone call requesting assistance regarding a man using a slingshot to shoot at employees and patrons at the Dededo Shell Gas Station.

Witnesses say that when officers attempted to detain the individual, the man retaliated by attempting to run over a police officer.

The Office of the Attorney General stated that a police officer allegedly discharged his weapon, “striking the individual.”

Patrons at Jenny’s Karaoke Bar across the street heard about 6 gunshots before running inside for shelter.

The man was then transported to the Guam Regional Medical City and has been pronounced deceased.

The situation is currently under active investigation by the Independent Investigation Team.

“The OAG and GPD are committed to a thorough investigation, while recognizing that transparency is critical to public confidence in the process,” stated the OAG. “As the investigation into the circumstances of this shooting proceeds, additional information will be shared with the public as quickly as possible while protecting the integrity of the investigation.”

Brain Bamba, Managing Director of IP&E Holdings LLC, stated in a media release, “We extend our thoughts and prayers to the family of the individual involved,” and further stated, “It is hard to prepare for a situation like this but we are grateful for our team’s response to the incident, as we believe their efforts prevented further injury.”

As of today, neither GPD nor OAG have any updates on the incident other than what has been stated in the AG’s press release.