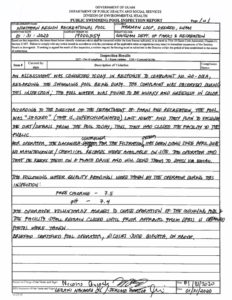 Both the Dededo and Hagatna pools are now closed.

In an inspection report issued by the Department of Public Health and Social Services’ Division of Environmental Health, it was noted that the Dededo pool was “murky and greenish in color.”

The report quoted the pool operator as saying that the controller for the filtration system has been down since April 2018.

In addition, DPHSS inspectors were unable to find any maintenance or chemical records on site.

Senator Regine Biscoe Lee has also written DPHSS director Linda DeNorcey, forwarding her constituents’ concerns that the condition of the Dededo pool may not be safe for public use.

“These residents, who are entitled to this community facility not causing them to get sick, report the water was brown and murky. The potential risk to children was too great for these families directed to the Dededo pool by the government following the closure of the Hagatna Pool,” the senator said.

The Department of Parks and Recreation is now vacuuming the dirt and debris from the Dededo pool.

The pool will remain closed until Public Health gives it the green light to reopen.