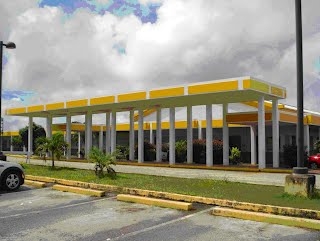 Before the governor declared the island in Condition of Readiness 1, the Joint Information Center opened up three public schools and advised residents who live in low-lying or flood-prone areas to either move to a designated storm shelter of seek shelter with relatives of friends in safe homes.
Astumo Elementary School Principal Derrick Santos says their school usually has the largest number of residents to come in for shelter. They were expecting about 400, but he says because Bavi was a Tropical Storm and not a typhoon, only about half showed up.
Santos says, “Most of them felt that as the storm winded down, it’s best to go home and seek the comfort of their home.”
Maria Ulloa also had a lower turnout than usual. Shelter Manager Dennis Malilay tells us that transportation for a few residents was a problem.
Mallet says, “I feel for some of the shelterees coming. We had a family walking over from Piga Subdivision. They were with two small kids in the rain coming over here with a stroller and a newborn. Of course we gave them shelter and they left after spending the night. We have a mayor who’s great and driving them back to their residences. As we speak, she’s doing that right now.”
Dededo Mayor Melissa Savares says, “The problem that we had was transportation for families that couldn’t get through and from. Lucky enough, we have a van. My staff picked up the residents, take them to the shelter, and now take them home.”
Savares explains the issue. “DPW wants them to go to the Mayor’s Office and then from the Mayor’s Office, they’ll pick them up and take them to the shelter. If that’s the case, they’ll walk pass two shelters before they get to the Mayor’s Office. We don’t want them walking, especially with those young children, in the rain or on the road,” she says.
Aside from transportation, it looks like everything else went smoothly at the shelters. As for how they felt about Tropical Storm Bavi, Santos says “We’re happy that it devastate the island. It’s always a blessing that nobody gets hurt and minimal infrastructures are damaged. It’s just a few leaks here and there and opening up school is always good for us.”