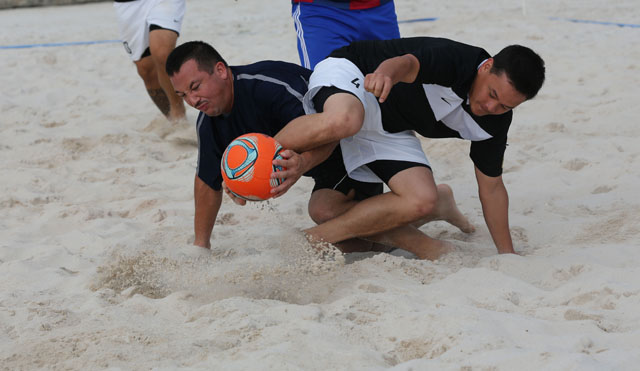 The Disasters’ Ray Blas opened scoring in the first minute of the match, managing to wrest the ball from the hand of Strykers’ goalkeeper Kevin Knaeble and take a shot into the empty goal. Six minutes later, a shot by Alvin Merfalen put the league’s newcomers at a 2-0 advantage over the defending champions. The Strykers’ Camden Aguon scored seconds later on the ensuing kick off, and later, a goal by Jared Reyes from a Christian Dickson assist knotted the match before the whistle ending the first period.

[Pago Bay Disasters’ Ray Blas gets tangled up with the Paintco Strykers goalkeeper Kevin Knaeble during opening weekend play of the 2013 Land Shark Beach Soccer League at the Guam Football Association National Training Center beach soccer court. Blas scored on the play, but his team fell short, conceding the match to the Strykers 11-7.]

The see-saw action continued into the second period, with the Disasters striking first. Pago Bay’s goalkeeper Seabrook Bizzle found teammate Alvin Merfalen on the opposite end of the court for the first goal in the second minute of the period. About four minutes later, the game was leveled after Bizzle mishandled Jan-Willem Staman’s shot. The Strykers earned their first lead of the game when Staman connected on a Ross Awa throw-in a minute later. The Disasters increased their defensive intensity, only to be called on a foul near the goal. Staman scored on the free kick to give his team the 5-3 advantage. 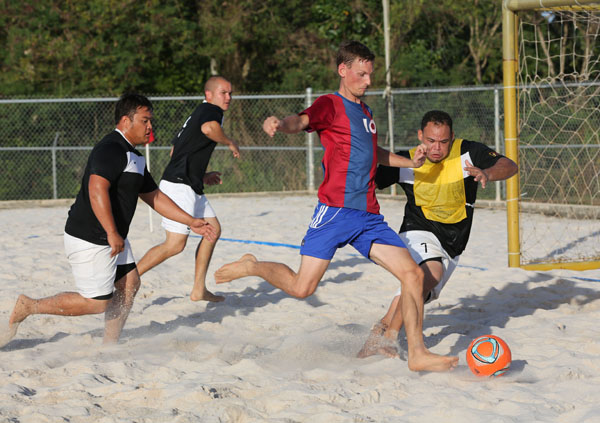 The momentum later shifted back to Pago Bay when Blas scored on a left-footed shot from the right side off a Merfalen assist. A minute later, the match was knotted again with a Merfalen goal from a Blas assist. Two minutes later, a goal from Reyes was returned with a goal from Pago Bay’s Albert Aflague seconds later for the 6-6 score. A Dickson volley shot gave the Strykers a slim 7-6 before the second period whistle.

Merfalen scored the equalizer on the opening kick off of the final period, but two minutes later, the Strykers were back on top when Staman connected on a goalkeeper throw from Knaeble. Staman scored again a minute later off an assist by Aguon and within another 60 seconds, the Strykers were quickly up by three on an Aguon goal assisted by F.J. Chargualaf. Pago Bay continued to fight for more goals with ten minutes remaining on the clock, but was unable to convert any opportunities. Reyes later scored the match’s final goal in the 14th minute of the third period. 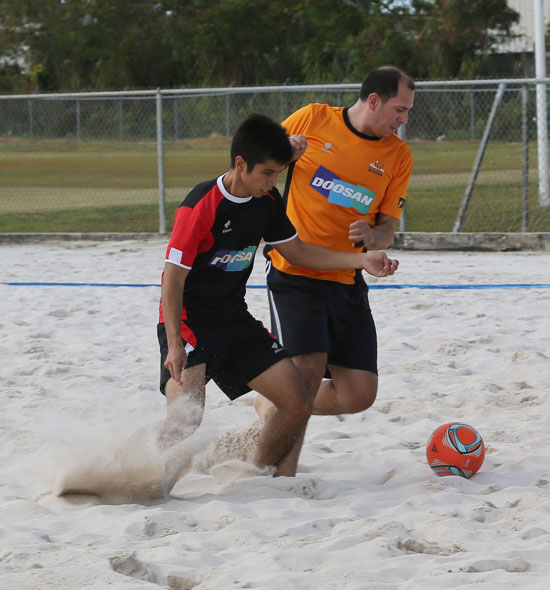 In the league’s opening match, the Disasters conceded the win via forfeit to Quality.

Beach soccer league action continues Sunday, when the Strykers take on Doosan at 2 p.m. There is no admission fee to watch the games.