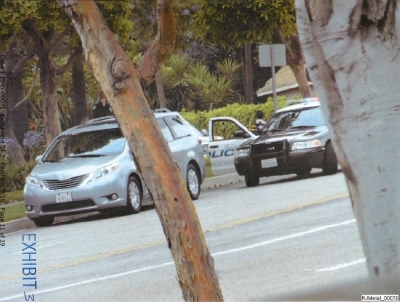 Guam – The defense pulled out all the stops during the cross examination of California K-9 unit officer Daniel Richey, following a morning of grilling on the use of GPS device to implicate Raymond Martinez in a ice smuggling case. The defense rolled up to court with a van similar to the one allegedly used to transport 8 pounds of methamphetamine in California.

Raymond Martinez’s attorney Peter Perez strolled up in a van to court this afternoon in an effort to provide the jury with more than just testimony and pictures regarding the events that surrounded the discovery of 8 pounds of meth in the back of a Toyota Caravan on June 4, 2015, allegedly rented out to Martinez and Juanita Moser.

Earlier this morning, Perez and Lujan grilled California K9 officer Daniel Richey on the discovery of a GPS tracking device which was allegedly knocked off the van during the search by his partner a canine named Blitz. Perez began with an image of the van which was pulled over requesting that Richie indicate where his canine alerted to an odor of narcotics. According to Richey, Blitz got an initial hit at the driver’s side rear wheel well, but could not say definitively if the dog was alerting to the device specifically. He did however, confirm that the device fell from the vehicle as Blitz was scratching at the rear wheel well. He further confirmed that it is possible to coat the GPS device with methamphetamine, and that he never saw Martinez and Moser in the vehicle, in the possession of the narcotics or conspiring to possess narcotics.

Lujan followed in suit of Perez, further prodding Richey on the events that transpired prior to June 4th, in which Richey received a call from a person identifying himself as a Torrence Police officer. According to Richey, a Detective Vasquez requested that Richey be in the area of South Redondo Beach the following day. Lujan pointed out several times that Richey did not have expressed approval from the Watch commander to offer assistance to the Torrence PD which is an outside agency. Further citing that there is no mention of the GPS tracker in Richey’s report, despite having a conversation with Torrence Police Department officers Schmitz and Craft at the scene to which Richey expressed that “it didn’t seem like an important fact to me.”

But in order to drive home the importance of the GPS device which allegedly was dosed in meth, the defense attorneys brought a van similar to the one used in California in an effort to have Richey demonstrate exactly where the device was found and how his canine searched the exterior of the vehicle. Richie did indicate that the model used had a different trim.

The defense is arguing that it was the GPS tracker that alerted the canine as a request to search the vehicle was denied by Moser and Martinez. After the positive hit by the K9 probable cause was established to search the van where allegedly two 5 gallon buckets concealing a total of 8 pounds of meth were concealed. As you may recall the defense arguing that it was the Torrence PD in working with Homeland Security Agent Erfel Montaguihan placed the tracker on the vehicle in an act of entrapment.