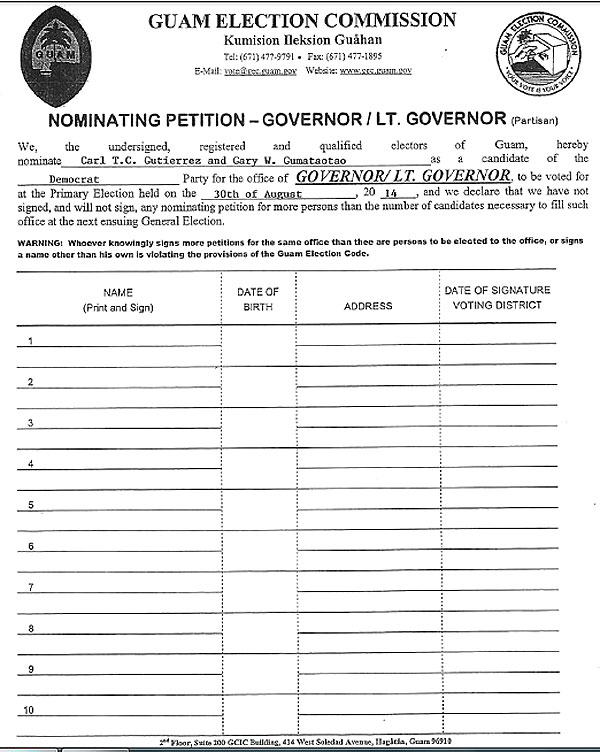 Guam – The Democratic Party of Guam has announced that the launch of a Facebook petition drive.

The release announcing the launch states encourages Democrats, disaffected Republicans and independent voters to download the petition from the Facebook page.

The petition can be found at www.facebook.com/guamdemocrats [or see it below].

The release also re-affirms remarks made by former Governor Gutierrez at a Party meeting in Sinajana Thursday night during which Gutierrez said he intends to run for Governor with attorney Gary Gumataotao as his running mate. Gumataotao is currently off island. A formal declaration of their campaign “will be made at a later date,” states the release.

READ the release from the Democratic Party below:

June 6, 2014 – The Democratic Party of Guam continues its support of a Gutierrez/ Gumataotao Gubernatorial Team by launching a Facebook petition drive today.

Island residents wanting to join in the people’s movement can go to the Democratic Party of Guam’s Facebook page and download the petition for circulation.

Governor Carl T.C. Gutierrez announced last night at the Democratic Party’s Central Executive Committee that he intends to run for Governor with attorney Gary Gumataotao as his running mate. Gumataotao is currently off island so a formal announcement will be made at a later date.

In the meantime, Gutierrez and Party Chairman Senator Rory J. Respicio are encouraging all Democrats, disaffected Republicans and independent voters to join the petition drive and download the petitions from the Facebook page.

“There is a real sense of excitement in the air as our Democratic Party of Guam is more united now than ever in the history of the party,” Respicio said. “This is a real movement of people from all walks of life joining the Democratic Party in pledging its full confidence and support behind the Gutierrez/Gumataotao Team. Our people hunger for change in leadership at Adelup so please get involved, download a petition and be a part of this amazing moment.”

Vice Chairperson Nerissa Underwood further stated: “This is a movement to empower ALL people, and reflects the Democratic Party’s work over the past 7 months to prepare ourselves for the upcoming 2014 election season.”