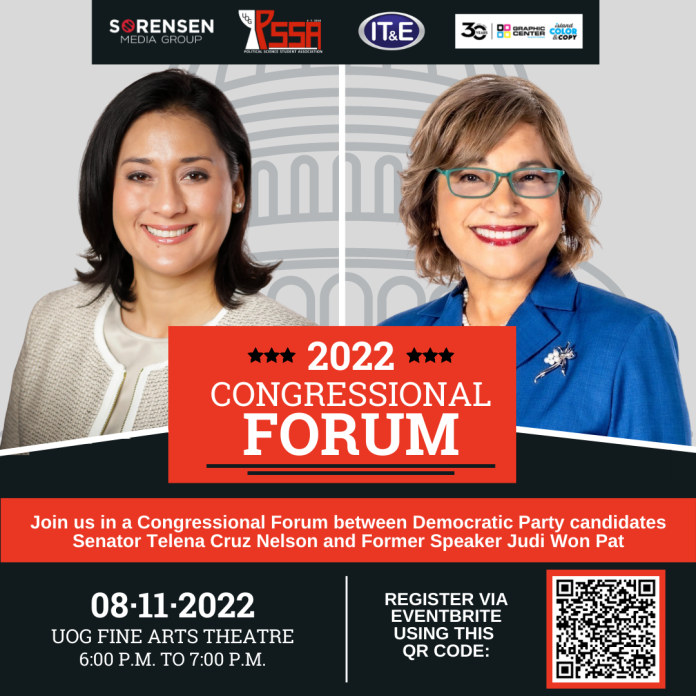 Senator Telena Nelson and Former Speaker Judi Won Pat shared their platforms, ideas, and policies in the first Congressional Forum at the University of Guam.

Both Democratic Candidates were asked a series of questions related to political status, military, economy, and civil rights to name a few.

Centering around the topic of economy, both candidates were asked “How will you Guam’s delegate to Congress, how will you leverage your position to help grow Guam’s economy? What federal policies or programs would you support to ensure that our people have jobs and basic necessities such as affordable housing and food security?”

The Former Speaker said in part that, if elected, she would connect US strategic interest to Guam for the Security of the island’s families, the economy, and the environment.

Won Pat says that by doing so, would bring more money and more jobs to Guam outside the fence.

she said, “I will add language into the NDAA for local laborers to build capacity for Guam so we can be less reliant on H2 workers. I will also put language of preferential treatment for local businesses to do the work outside, and for housing to ensure in the NDAA that H2B are available to work off base or that they’ll be able to build homes in our community.”

Meanwhile, Senator Nelson says in part, that if elected she would advocate for low-income tax credit to help bring developers to Guam.

The senator also argues that despite the military pumping money to the NDAA, that does not equal jobs for outside the fence.

Saying that the military is focusing on the mission.

To help with the economy, the Senator says that she would help in diversifying jobs outside the fence.

An example she gives is Aquaculture.

Nelson said,  “Its a huge revenue business. It offers our marine biologist new opportunities to not have to leave Guam to seek a career. And those are one of the things that thrived in Guam in the past, but it has been stopped due to federal law and statute. And I will work to resolve that and reverse that federal law and statute.”

To view all the questions, and the Democratic Candidates responses in full, individuals can view the forum on PNC’s Facebook Page.