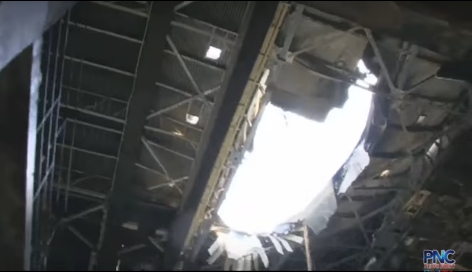 Picture of the Cabras 3 and 4 roof, after the explosion.

Guam – Work on the Cabras 3 & 4 roof has begun and starting next week, a demolition team will be brought in to remove the charred roof and move forward with it’s investigation into the explosion of Cabras 3 & 4.

General manager John Benavente says that it will take anywhere from 30-45 days before the Cabras roof removal will be complete. At that time, Benavente says that they can better assess what caused the explosion at Cabras 3 & 4. Benavente says that once the demolition team comes in next week and removes the old roof, a temporary roof will be built and investigators can begin to see, up close and personal, what caused the explosion. The company that was contracted to demolish the roof is Pernix Guam LLC. Former General Manager of the Guam Power Authority Joaquin Flores is listed as a ‘senior advisor’ for Pernix Guam. Current general manager of GPA John Benavente tells PNC What’s next after the roof removal.

“Once they put up the temporary roof, then the decision on moving forward with Cabras 3 has to be made therefore from there they can decide the final for the roof and the machine, but the first part is removing the roof allowing us to look at the engines and then after that putting up a temporary roof, not one that will withstand a typhoon if you will, i hope so, but its not really designed for that, but certainly will be adequate protecting for the rest of the machinery within the plant,” said Benavente.

Benavente says that Cabras 1 will be taken down for preventative maintenance starting this weekend and the fast track generators should be ready before the December 30th target date.