Sounds of cheering and clapping erupted from the USS Theodore Roosevelt as its sailors came together in a show of support for relieved Captain Brett Crozier.

He was relieved of command days after he sent a letter to Navy leaders that was leaked to the media. The emotional letter asked for drastic moves to stop the spread of coronavirus on the ship.

Farewell to USS Roosevelt Capt. Crozier from his crew. https://t.co/5bfeZ7wx1U

While Acting Secretary of the Navy Thomas Modly said he lost confidence in Crozier’s ability to lead the warship, it appears that the captain still maintains the confidence and loyalty of a number of those who served under his command and their families.

Called a man for the people, a Captain that cared, the best Captain they ever had, sailors and their family members hit social media hard with an outpouring of support as they bid Captain Crozier farewell.

With the hashtags “we are TR Strong, MY CO, and TR,” footage of the event captured the sounds of the USS Theodore Roosevelt’s crew chanting “Captain Crozier” despite Modly’s reference to Crozier’s letter as “crumbling under pressure.”

Modly accused Crozier of sending the letter out of emotion and not truly appreciating the security risks at play.

But it appears that emotion is what has won over many sailors and their families.

Chelsea Wooters wrote an emotional thank you in hopes her post finds Captain Crozier: “I hope you know so many of us See you. I hope you know you saved lives even though you knew you were risking your career. I wish all five-thousand of your sailors could refuse to get back on that ship. To stand up for you like you so selflessly did for them.” Wooters continued, “Their lives were more important than a mission.” 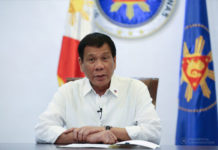 Nursing has always been an interest for UOG’s 2020 Student Athlete of the year.